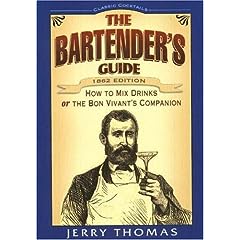 Last December I ordered a reproduction copy of the The Bartender's Guide from 1862 by Jerry Thomas, put out by a publisher called New Day Publishing. They also have a reproduction of The Stork Club Bar Book and the Old Waldorf-Astoria Bar Book.

Every couple of months, I get an email saying that my order has been delayed and that it will be available in a another month. Today I received an email stating it's now delayed until December of this year. Amazon has marked it as "currently unavailable."

I tried to reach New Day Publishing for a story I wrote a while back, but was unable to locate them. (I did reach a publisher with the same name, but they produce Christian literature. The receptionist said, "No, that wouldn't be us.")

Does anyone have the scoop on what's up with them?

Wanted to buy one off amazon last week as well and found the same problem.
There might be a chance to buy it over a European distributor.

Problem is, they don´t use paypal and don´t accept credit cards. Try their contact:

One book is about 20 Euros, so it might come out around 30 with shipping.