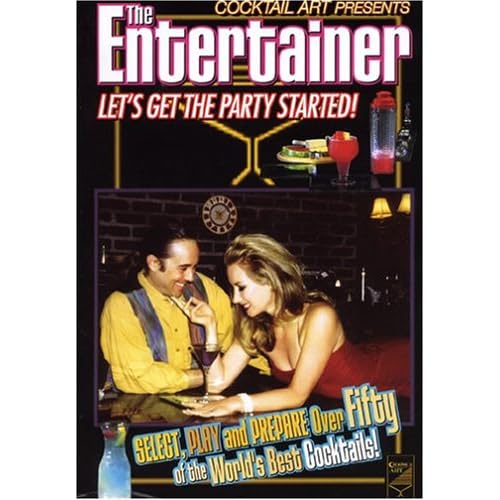 A long time ago, I decided to add every bartending and liquor DVD available to my Netflix queue. Well, they all finally hit the top of the line and I'm getting them in the mail. I did the same thing with wine DVDs about six months back, thinking I'd get a story out of it (no sale so far...) to great success.

But as I don't think anyone will want to buy reviews of cocktail DVDs, I'll post them here instead. Project! Here is the first.

Kyle Branch, who writes a recipe column for Tasting Panel Magazine, hosts this video with a name that couldn't be any more misleading. It's not about flair or technique, it's just instruction.

The 50+ cocktails he demos are divided into sections based on the type of cocktails made. Branch stands behind a fake bar that looks like rented office furniture while fake cocktail lounge crowd noises and elevator jazz play in the background. High-production it ain't. Most of the cocktails ain't things I would drink either- the Blade Runner (a type of pousse cafe) in the Classics section, sour apple and chocolate martinis in the section of that name, strange drinks like the Pink Floyd in the Premium Quenchers section, and a whole bunch of drinks in the Shooters and Long Island Teas section too terrible to name. More than being horrible drinks, I think they're just quite dated- consider how much we've all learned about drinks between 2003 and today.

All those bad things said, this isn't a bad video. Branch clearly knows what he's doing (he's obsessive about wiping liquid off the bar top) and has made these drinks many, many times before. (I spent the whole time wondering where he works- high-end college bar? Upscale nightclub? Poolside bar? Vegas?) He even uses a wide variety of good bar glasses and about ten different vintage shakers. The segments are him narrating while making each drink, with occasional bits of extra advice like how to core an apple and crack ice. Heck, if you memorized all these drinks and how to make them you might be able to bluff your way into a job at the average bar.

It's not a bar I'd want to drink in, though. Amateur and home bartenders may learn quite a few tips or improvements to their techniques. College students will learn a ton. Drink nerds will get less out of the video, recoil at every use of blue curacao, and bemoan the lack of explanation in some areas. These days, it's not so much about how, it's about why.