When Alembic bartender Josey Packard talked about moving from San Francisco back to Boston, she was worried about getting the right job. "There's a place opening in the fall that will have a Kold Draft  machine, and I think I need to work there," she said. "Otherwise I'll have to make ice at home and bring it in my backpack on my bike to work." 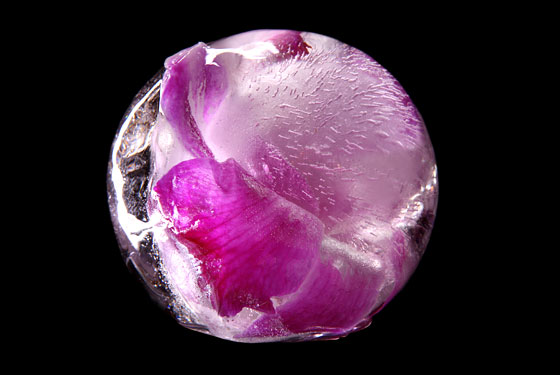 The statement was ridiculous and made in all seriousness. And I know how she feels- I'm not a bartender but I, too, cringe when forced to use the wrong ice in a drink. I keep three sizes in my refrigerator at home at all times. For a bartender, it must be like being a bike messenger forced to install training wheels.

The New York Times covered the issue of ice last week from the consumer's perspective, and mostly focused on store-bought ice.

Recently, I found this May New York Magazine slideshow on the best ice in New York, and it made me seethe with jealousy. Ice orchids? WANT.

At Tales of the Cocktail this July, Kold-Draft supplied the ice for the convention and it made me very happy. I spoke with some Kold-Draft people there and found out that the machines are really not all that expensive, at a little more than $3,000 each. (Please correct me if I'm wrong, barfolk.) If that's the case, why don't more places have them? Once I took a friend on a bar tour of San Francisco and realized we hit every venue that has a Kold-Draft in the city- you know, all five of them.

Looking on the website, it appears that you can buy a Kold-Draft machine for your house for $1800 that fits under the sink. That doesn't seem that expensive (my perspective may be skewed on this) though still not affordable for a poor writer like myself. But I can imagine how glorious it would be, lounging around with those big, clear cubes like some sort of celebrity. I would have people over and they'd be all, "My, what big ice you have!" and I'd act nonchalant about it.

Then again, it would only foster ice snobbery in me, and I'd end up bringing a load of them to ice-challenged bars in my backpack. Can you use this good ice instead?

I could be mistaken, but a couple of months ago when I was looking into the Kold-Draft for our new bar, I also looked into their home model, the Ice Butler, and found that it produces tubular ice, not cubes like the granddaddy machine. A bit disappointing...

Further research is needed, and I'll ask my Kold-Draft guy the next time I talk to him.

I guess that would be more 'cylindrical', than tubular...