It's time for the monthly-or-so round-up of booze stories in glossy magazines.

In Tasting Panel, an industry magazine to which I'm a regular contributor, I have three stories in the September issue: One on Tales of the Cocktail, a quick blurb on Appleton and Kobrand, and a story on savory cocktails with quotes from Jackie Patterson formerly of Orson in San Francisco, and Stephen Kowalczuk of Room at Twelve in Atlanta. 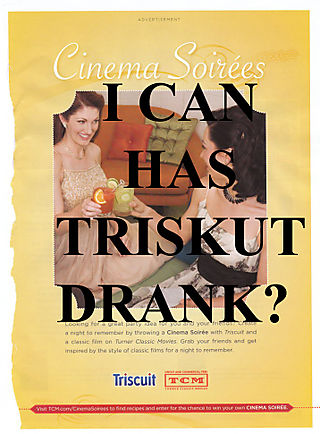 Bon Appetit (October) has a recipe for the Moscow Mule and a round-up of ten wine bars.

There is also a largeish feature on blended whiskies that I don't believe mentions malted vs. grain whiskies, which, you know, is kind of important.

Also, how do you know when this cocktail thing is getting big? When Triscuit is sponsoring a cocktails/movies/Triscuits promotion. For reals.

Men's Journal (October) has a round-up of America's Best Beers, regional beers, and craft beers. It's a lot of beers.

944 Magazine (San Francisco edition) has a story on Lotus Vodka.

Playboy has a little blurb on accidentalwine.com.

7X7 has three booze features: One on Clock Bar, one on white summer wines, and a third on ginger in drinks with the recipe for Beretta's Agricole Mule. (mint, cane syrup, rhum agricole, lime juice, gingle syrup, seltzer)

Details lists 5 tequila cocktails, four of them they just describe and one they print the recipe for. The drinks are from the Pegu Club (NYC), TearDrop Lounge (Portland), Bar Pilar (DC), and Violet Hour (Chicago).

Gingle all the way!

You mock my typos? How dair you!