The bar at La Mar 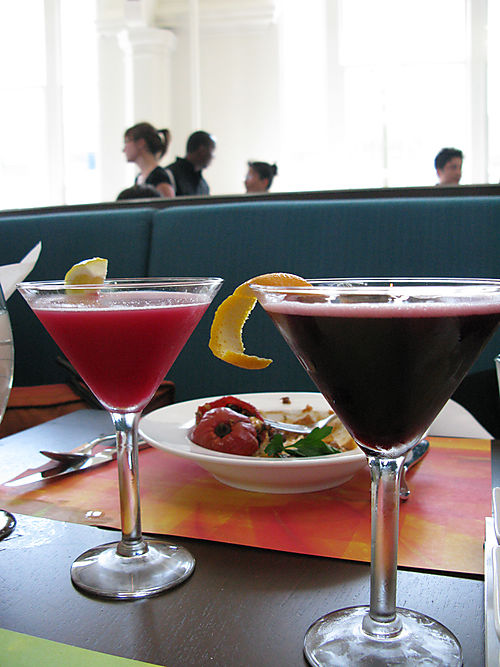 Yesterday I had a chance to check out La Mar Cebicher'ia Peruana, the fancy new Peruvian restaurant opening up on Pier 1 1/2 in San Francisco. Gorgeous space, delicious food. But you don't come to Alcademics to read about food.

The drink menu is all about pisco, listing 12 pisco-based cocktails. It includes the Pisco Sour and Pisco Punch, of course, but a lot more creative drinks as well. Several of the drinks include chicha morada (a purple corn juice that looks and tastes a bit like purple grape juice), and many of them include passion fruit.

There are some interesting combinations on the list, including the Chilcano de Pisco that's just pisco, ginger ale, and angostura bitters, the Capitan Francisco with pisco, sweet vermouth, and bitters, and the Chicharrita made with pisco, Drambuie, chicha morada, and orange juice. There is also an imitation Cosmopolitan and Bloody Mary in the mix.

I'm not sure how they make their Pisco Punch or the gomme syrup for it, but for the Pisco Sour they throw it in a blender for a brief second to get it nice and frothy, then double-strain it into a glass without ice.

I noticed that they're using BarSol Pisco in the well, and have dozens of bottles of Pisco Vina de Oro on the top shelves. (I haven't tried it yet- could be a paid promotion, could be the good-looking bottle, could be tasty stuff.) There are many other brands of pisco on the shelf, but I forgot to ask the total number.

I went there with Victoria Damato-Moran, who will be the day lead bartender when they open full-time next week. I love that this place has a separate bar area from the restaurant where Victoria will be working, and hope that it won't be chock full of people eating when they should focus on drinking. There's plenty of good stuff to drink there. 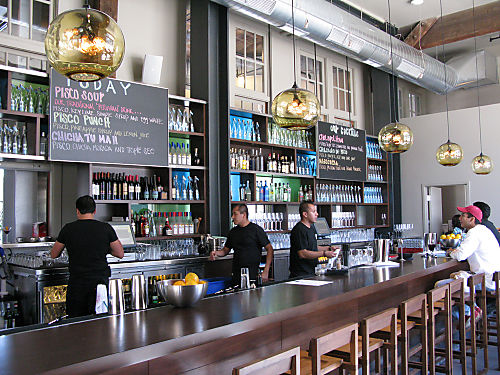 I wanted to comment on the quality of the photography as well. Very well done sir. How long does that bar extend?

Not much farther than it appears in the picture- it's not super long.

camper english have you visited the delachaise on st. charles in new orleans it looks alot like this place.

Very nice Camper..thank you for the beautiful pictures. The bar is the exact design of the La Mar in Lima, Peru.
They must be tall in Peru....The shelf where the Skyy Vodka is, I can just reach...;-)
I saw a library ladder for sale on Craigslist ! LOL !!
The Blue webbed chairs , that run throughout La Mar are the same as the ones in Lima.
WE are the 7th restaurant, the only one in the US, so I imagine, when we go to Vegas and New York, they will be the same as well.