It's the Organic Cucumber Vodka Showdown!

I sipped each of these blind, but it was pretty clear who was who. The Rain Cucumber-Lime smells more like lime than cucumber, with a juicy watermelon aspect. All of the Rain vodka flavors are intensely flavorful, bordering on perfumey, and this is no exception- though to me it seems a little less dramatic than the lavender lemonade and honey mango melon flavors.

The Square One tastes solidly like cucumber-infused vodka. I've done this infusion at home and yep, they nailed it. It tastes a bit more like the skin and outside of the cucumber than the inside. As we'll see in the next section, there are disadvantages to this.

Crop is thicker and sweeter than Square One, which you'd expect given its 35% ABV. The cucumber flavor doesn't taste as natural to me, and the flavor doesn't linger on the palate nearly as long.

Again, the Rain vodka stood out here. The lime gives off that powdery aspect I associate with Rose's Lime Juice. On its own the Rain tastes like perfumed vodka, but in a drink the flavor opens up. It's not my favorite and it's not natural-tasting, but it's drinkable and a no-brainer refresher.

I thought Crop vodka would lose a lot of its flavor with dilution, but it wasn't so bad. It had a realistic cucumber flavor, and it came to life a bit more with dilution than it did on its own. Again it was sweeter than the Square One.

The Square One, unfortunately, didn't taste as good as I wanted it to. I'm pretty sensitive to the flavor of wilted vegetation in spirits (I've never had a mint simple syrup I could stand) and to me, this flavor tasted like the cucumber was starting to go off. It still tasted natural, but too natural. 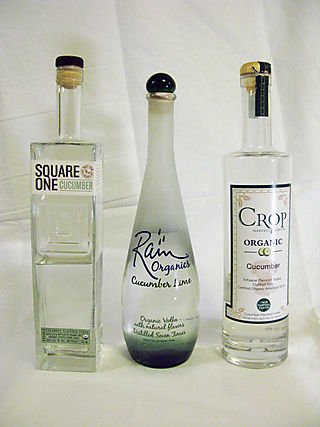 Realizing I had a mini of the Square One Cucumber in the house, I broke that open to compare with my big open bottle. I went back and forth several times and concluded that if the flavor changed over time, it wasn't as significant as I'd thought.

So then I repeated the vodka-soda experiment with 3 ounces of soda to once ounce of vodka. Here the Crop flavor fell dead and pointlessly flat, where the Square One tasted very cucumbery, though still not as fresh and crisp as I would like it. I think that's what's missing in all of these: a natural crispness.

The Rain Cucumber Lime is more in line with a traditional flavored vodka than an organic flavor. It doesn't taste natural, which is not to say it tastes bad, but it's not on the same playing field as these two other vodkas.

The Square One Cucumber tasted the most natural throughout, but perhaps too natural. It was a bit intense on its own and with a small amount of mixer, but performed nicely when the dilution increased. The Crop Cucumber was delicious until I diluted it too much and then it was the least pleasing.

Pricewise, the Square One is going for around 30 bucks online, compared with 20 for the other brands.

If you want something cheap and dumb to mix with soda water in large quantities, Rain wins. For sipping neat or in booze-heavy cocktails, the Crop will work well and you can probably cut back on the sugar in your other ingredients. And for more sophisticated and natural-tasting cocktails, go with the Square One.

I guess everybody wins. So much for the showdown.

How about a cucumber gin challenge? Put Hendricks against Martin Miller's Westbourne Strength.

never tried squared one, tried crop one regular and flavored, felt like half poo poo next day(had a mild hangover). i always drink rain, no hang over what so ever, unless you over drink(1litter or more per person) next day doesnt feel so good but not bad.

Thanks for the showdown, I am debating between spending the extra money on the Square One versus the Rain and the girlfriend is not a fan of sweeter flavored vodkas. Think I'm gonna go with the Square One based on your recommendations.

That rocks! Gonna try that one of these days. Additional knowledge about cucumber? click the link below

What about Prairie Organic Cucumber Vodka?

It probably didn't exist yet when I did this test in 2008.

Sorry....I forgot to mention which Vodka. The Crop Organic Cucumber vodka froze in the freezer.

I think it's pretty strange that it even partially froze at 35% ABV, I would think that your freezer would have to be super cold to freeze at that proof. I guess I don't have a real answer for you other than I'm surprised it's happening.

Do you think the Crop has added Sugars?

It's been ten years since I wrote this and I'm not sure if they still make Crop anymore, but yeah, I would suspect some added sugar. It's pretty common in most flavored vodkas.