Agave syrup backlash! CHOW.com links to some stories on agave syrup and how it might not be so good for you.

But at least one of those stories is not so scientific. Arguing that the syrup is not a raw food but often labeled as raw syrup (a point he's totally right on- no disagreement there) he argues about all the terrible health problems that it might cause. I would have believed much of it, except for this:

"Agave Syrup was originally used to make tequila.  When Agave Syrup ferments, it literally turns into tequila.  The enzymatic activity therefore MUST be stopped so that the syrup will not turn into tequila in your cupboard."

Riiiiight, much the same way simple syrup will literally turn into rum and mashed potatoes will literally become vodka if you leave them on the counter overnight. I wish! 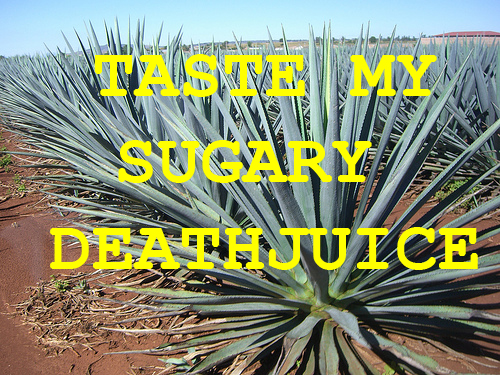 Agave is a lot like a sweet potato- it even tastes like one when it's baked. In the raw state, it tastes like a yucky plant, then you bake it and it gets sweeter as it converts into sugar. Yam-tastic. Then you squish out the sugar and ferment it into a beer, then you distill the beer into a spirit. In this case, the spirit is tequila.

Is that beer bad, or unhealthy sugar? I dunno, but if so, it's probably bad in the same way maple syrup is bad. But I certainly wouldn't take the raw food guy's analysis at face value. Neither would I trust one brand that says (okay, implies) that the other brands add artificial sweeteners to their agave syrup.

What's interesting to me (because I am a nerd) is that these methods for producing agave syrup first squish out the liquid then bake it to get sugar syrup. In most tequila making, they bake first and squish later. That is, most with the exception of some large tequila makers who use a diffusion band" that can extract  the fermentable substances from agave first, and bake second. (Could this statement be totally incorrect? Yes, as I learned it on day 5 of a five-day tequila binge through Mexico.)

Oh right, the point: If you're using agave syrup for it's low-glycemic fructose whatever then it's certainly worth a closer look at what you're getting. If you're using it to avoid high-fructose corn syrup or as a lower-calorie drink  sweetener, I don't think there's any need to panic until we learn a bit more.

Not very convincing research and this guy has a limited understanding of sugars. Human are omnivore's, which translates to "devour everything". Camper excluded, he's a herbivore.

Basically humans can handle just about anything food wise. But it doesn't mean we should eat "everything" in copious quantities.

Sugars are not bad for you, we actually die without them. But, if you consume just sugar, you'll reduce your life span. So it is a trade off. Do what you enjoy, possibly shortening your life by a fraction. Do everything to live longer, but lead a long, pathetic, miserable existence. Your choice.

If you didn't laugh at that statement, you'll die sooner cause laughter has been proven to increased life span.

Sugar is sugar, raw, refined or processed. It's quantity that does the damage.

i heard that tequila can become "corked" what is that all about?

I believe anything with a cork stopper can become corked, just like wine. I actually had a bad cork in a bottle of rum recently. But at least with spirits you store them upright so there is not usually much contact between the spirit and the cork.

Hmm..I thought I used it because it tastes good. Wierd.