Last week, the day after WhiskyFest when I didn't really need to be drinking any more, I boarded a bus for an 11-hour tiki tour as part of Tiki Crawl 8.

Actually, it was only one of the four days of Tiki Crawl- the East Bay day. There was also a South Bay, San Francisco, and a cool-down potluck. Believe you me, one day was enough.

We started our journey at the Phoenix Hotel, the sponsor hotel for the crawl, at 3PM. We loaded up the bus and first headed to Forbidden Island in Alameda. The bus was loaded with people from San Francisco, Orange County, Portland, and I think someone came cross-country for the tour.

At Forbidden Island, there was a line out front waiting to get in. This was partly because of Tiki Crawl, and partly because there were two limited-edition mugs for sale. The tiki people love their mugs. One was a mug commemorating the tiki crawl, and I don't know what the other was commemorating or if it was just a special edition.

Inside the bar, I had a couple drinks, including the famous Sidewinder's Fang. Delicious. 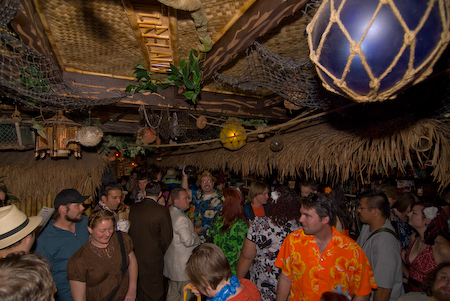 After a couple of hours, we loaded up the bus again and headed into Oakland. Our first stop was the rather tiny Conga Lounge. We had more people than could really fit into the room, but it was fun anyway. They also had a mug, and it came with a tasty drink in it at a discount for our group. I couldn't resist and bought one.

Next up was the Kona Club, also in Oakland. The place is a large former sports bar (where fantasy football was invented, apparently) turned into a tiki bar. The same interior designer who built the interior of Forbidden Island did this place- and obviously had a much larger budget to work with. It was gorgeous. But the focus of the Kona Club is the decor, not the drinks. It's still a sports bar and hangout place, not a tiki-obsessive's best shot for top cocktails. Worth a visit? Absolutely.

I also picked up a mug here (five bucks, how could I resist?) with a drink inside. My mug collection just doubled! 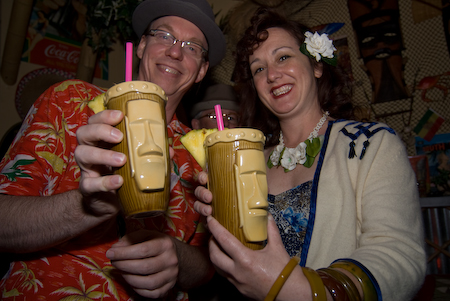 Our final stop and grand finale was Trader Vic's in Emeryville. It's a big spot on the water, and would have a beautiful view during the day. They have the original stove from Hinky Dinks (the restaurant that became Trader Vic's after he was inspired by Don the Beachcomber), as well a historical rum display and other artifacts.

The regular Vic's crowd is an early crowd, and we were nearly the only people in the restaurant. They treated us incredibly well with a discount buffet, a fun band, and all drinks for five bucks for the night. I had many. Not only that, on the way out they gave each of us a mug (more of a coffee mug, but still).

The bars were fun, the bus was super fun, the people are awesome and friendly. The tiki scene is so interesting because it's actually the intersection of a lot of different scenes- part drink nerdiness, part history obsession, part arts and crafts, part home repair (everybody has a home tiki bar), part fashion, part music. Mush it all together and you get a wad of wonderfulness.

My photos from the day are here.

I SO need to get to one of these someday.

Hey there Camper, Random that a friend of mine (Clare) sent me your website link and there I spied Tiki Crawl 8! Great pics, loved your blurb. That was a fun fun day! Can't wait until next year, hope you'll be back too.

I'm a newbie to the world of all things Tiki. How do I get on a list to be notified of the Tiki crawls? If one exists. I've missed out on so much and it really sux.

Eric- Everything you need to know can be found at:
http://www.tikiroom.com

That should link you to all the bars, bar crawls, and other events.