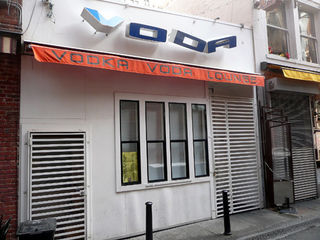 Once upon a time, more specifically around the turn of the millennium, several bars would brag about their extensive vodka selections. It was the age of the Cosmopolitan and the Vodka Martini, you'll remember. I believe Club Mighty had a separate vodka bar, and I seem to remember a smaller bar like Hush Hush promoting its large variety of the clear spirit.

Eater SF reports that the one remaining bar completely dedicated to the stuff, Voda Vodka Lounge on Belden Lane, is closing. I'm sad to see it go. Not just because I think vodka (which outsells all other spirits in the US by a huge margin) deserves at least one bar dedicated to it, but because I just included the bar in a hotel guide and was planning to review it in round-up story I'm writing this week. Stop the presses!

Does anyone know where else in San Francisco has a large vodka selection? I now need a last-minute replacement for my story. It seems like there must be a hotel bar or Russian restaurant somewhere that has at least 20 bottles on the shelves. Little help?

you must be trolling.

i remember this place having a big vodka selection in SF: http://www.paragonrestaurant.com/html/sf_bar.htm

I think Russian Renaissance restaurant on Geary near 16th has a good vodka selection. The other Russian places I knew with full liquor licenses I knew have gone under. Be brave and check it out. You can always run down to Tommy's afterward.

Heh- a bartender from Badlands was at FI last night and said they had a lot of vodka, but I think it's just a bunch of flavors. Still- need a field trip, CE?