Eric Felten has a hilarious (as usual) story about Andrew Jackson's inauguration party in the Wall Street Journal.

The unruly bunch pushed into the White House, clods standing on the silk-upholstered furniture in muddy boots to get a glimpse of the new president (who was trying not to be crushed by his well-wishers). "The reign of King Mob seemed triumphant," wrote Supreme Court Justice Joseph Story, appalled. When the stewards finally delivered buckets full of Orange Punch, the crowd lunged for the pails, overturning furniture, smashing the glassware, and -- perhaps worst of all -- spilling the punch itself. Quick-thinking waiters lugged the remaining barrels of punch out onto the White House lawn, enticing Jackson's admirers to take the party outside.

The story also includes an updated recipe for the Orange Punch served at the party. Read it here. 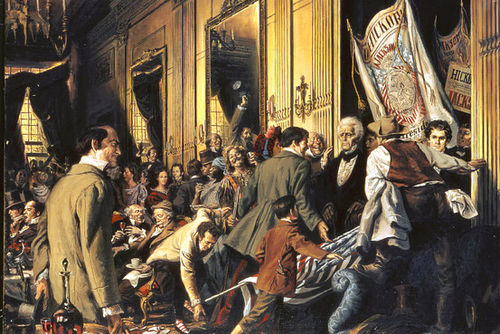 Ahhhhhh..thats my Syrup ! Thanks for posting that.

Victoria something is wrong with you

Cant we resolve this is a friendly manner???

Victoria is right the syrup is delicious!