SF Bartender News: Good for Him, Bad for Us 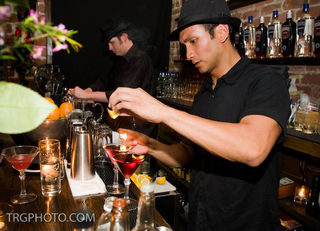 San Francisco has lost three great bartenders in the last year- Josey Packard, Joe Parilli, and Thomas Waugh. (Lost as in, moved to other cities, not like swallowed in an earthquake.) Well, we're about to lose one more- Kevin Diedrich.

Kevin works at Clock Bar, Bourbon & Branch, where he makes a lot of ingredients for the bar, and also did much of the heavy lifting opening and running Cask. I have no idea when he has time to sleep.

I guess he'll sleep on the plane, because he just accepted a 6-8 month position running the bar program at Michael Minas's Bourbon Steak in the Four Seasons in Washington, DC. He leaves next week.

That's terrific for him, but a big bummer for us. He'll be working his final two shifts at Clock Bar this Wednesday and Thursday.  Come wish him well in his new job, and maybe cry a little in your drinks. Let's hope to elicit enough sympathy that he decides to move back when the job is over.

That may seem like an obvious statement, but two of the "great" bartenders you mentioned were, at most, grumpy alchemists, but not bartenders.

Andy, I couldn't agree with you more, however, I never found Kevin to be grumpy, or Josie, hmmm...not Joe, or even Thomas, maybe I was just lucky. Maybe they moved on because they needed to find a fresh outlook on the work they do.
I love bartending, been doing it for 15 years, and will die behind the plank, along with my syrups, tinctures, bitters,potions & brews AND most importantly always with a giggle and hug.
Have fun Kevin ! Rock on brother !

Joe's just riding out the recession in Italy. He will return ;^)