SF Event: Beer vs. Wine vs. Sake- and another Giveaway 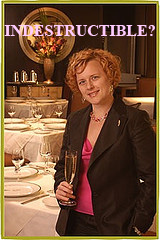 Like the Godzilla of pairing, Emily Wines has twice squashed her competition in the Fifth Floor Restaurant's Food and Drink Pairing Deathmatch (also known as the Three on Five event). These competitions pit a sommelier (Wines) against a beer professional and usually a mixologist to see who can pair his or her beverage of choice better with each of the five courses served at dinner.

Twice Emily Wines has entered the ThunderDome (private dining room) and twice emerged as the sole victor, leaving only tearful beer and cocktail geeks (and satisfied diners) in her wake.  Will she be over-confident, like ThunderDome's seemingly-unbeatable Master Blaster? I think we all know how that turned out. (Master Blaster didn't win.)

For the next battle, scheduled January 20th, Wines will take on two new competitors. Representing beer will be Arne Johnson, head brewer for the Marin Brewing Company. He may have been brewing since he was 13 years old, but can he pair his brew with food? We shall see.

Instead of a mixologist, in this battle the third contestant will be Beau Timken, owner of the True Sake store, author of Sake: A Modern Guide, sake menu consultant, educator, and a guy who makes a point of pairing sake with every type of cuisine imaginable. He will, of course, be pairing sake.

The battle takes place on January 20th at the Fifth Floor Restaurant in San Francisco, beginning at 7:30PM. Each contestant pairs his or her beverage with each of the five courses of the meal, meaning diners get 15 drinks along with their food. That's a bargain at $125 per person, and the people I've spoken with who've attended these events in the past have been very happy with the whole experience. More information is here, and make sure to reserve for the "Three on Five" event.

*** I'll also be giving away a pair of tickets to this event to a randomly-chosen person who signs up to the Alcademics A-Plus email list. If you're not already on the list, sign up now as I'll be choosing the winner later this week.