The History of the Ice Trade 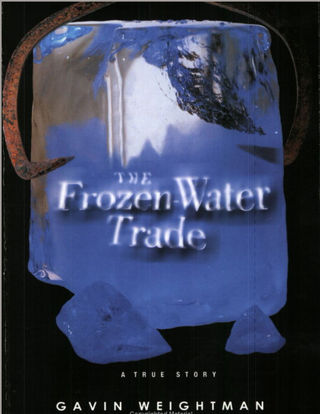 by Gavin Weightman. The book is the story of Frederic Tudor, whose wacky idea of cutting ice in winter from ponds in Massachusetts and selling it to people in warmer climates in the summer turned into a 100 year industry until refrigerated ice became readily available. Tudor's ice was shipped as far as Martinique, India, San Francisco (around the tip of South America where there was plenty of ice already), New Orleans, and throughout the American South.

Of course, my interest in the book was purely cocktail-related. The sale of ice was directly responsible for the creation of drink categories including juleps, cobblers, and smashes, and created the need for cocktail shakers as well as straws. Iced drinks became popular with Englishmen in India, but didn't catch on in England (not for lack of trying to sell it there). American cocktails stood out from English and other ones in their need for ice (as evidenced by books like Recipes of American and Other Iced Drinks

), and grew in format and in number because of this ingredient.

As we know the cocktail was an American invention and probably its first native cuisine, we can probably chalk up a lot of the credit for America's famous drinks and bartenders (pre-Prohibition) to this one guy who created a world-wide industry out of nothing but freebies- frozen lakes, sawdust to keep it cold through the summer, and room in ships' holds as ballast on trading routes.

The book itself isn't the "page-turner" as described on the cover, nor does it delve too deeply into the discussion of the impact on cocktails, but with an understanding of what came later in American cocktail history, it's fascinating for its implications.

Liked the review on this book. Got a chance to read a few chapters a while ago and I did not quite make the connection between ice and cocktails.