A couple weeks ago, I attended a cachaca intensive with Minister of Rum Ed Hamilton and Cabana cachaca distiller Cesar Cestari. Here is some of what I learned.

Up to six grams per liter of sugar may be added to cachaca without declaring it on the label. Between six and fifteen grams is then called sweet cachaca and you can find it on the labels of Brazilian brands as "cachaca adocada." 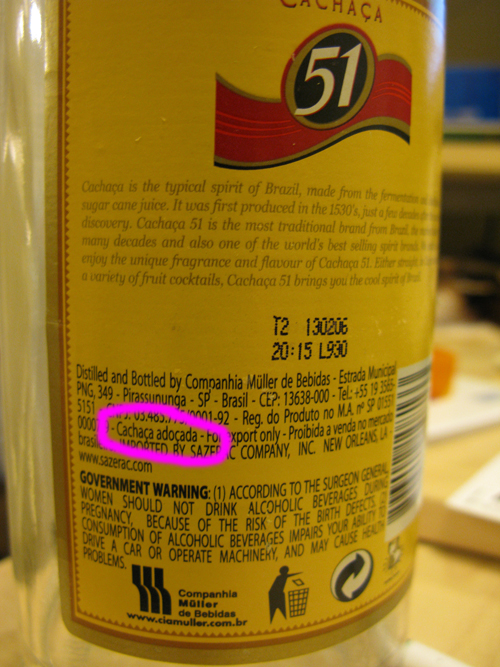 Most cachaca (like 90%) is made in column stills, and most of it has sugar added. Multiple column stills allow you to remove more congeners than a single-column still. Cachaca must be bottled at between 38 and 48 percent alcohol by volume.

June through December are the distillation months. At the Cabana distillery, they double distill cachaca in pot stills, but do it in a way I've never heard of before. During the harvest season, they distill all the fermented sugar cane juice just once and store it in large vats. The don't even cut the heads and tails at this point. This stabilizes the liquid, as sugar cane quickly goes bad like an apple that turns brown after you take a bite.

After they're done distilling sugar cane for the year, they mix the low-alcohol spirit together for consistency and do the second distillation. Then afterward, they add water and let it marry for a couple months before bottling.

Brazilian woods are harder than American/French oak and impart less flavor. There are tons of different woods in which cachaca is aged.

Cane grown for sugar is all about yield, whereas for cachaca it's all about quality. In different parts of Brazil, different types of sugar cane are grown best suited locally to make cachaca. Sugar cane grows in clumps. After you cut it down one year, the clumps become thicker and thicker. Every five years or so, they dig up the clumps and plant new sugar cane (just pieces of old cane) to start the process over.

Cachaca 51, or Pirassununga, is the third largest spirit brand in the world. There are 4000 brands of cachaca and about 30,000 producers. 1.3 billion liters of cachaca are distilled each year.

Molasses-based rums have a high sulfur content, so you need to age even the clear ones to take the edge off.

In order for cachaca to be called aged cachaca (meaning more than one year in wood), only half of the stuff in the bottle has to be aged for that long.

I've only had the pleasure of trying a handful of cachacas here in the Eastern US, but I definitely do not recommend Pitu. This has to be the worst spirit I've ever had the displeasure of trying to force down my throat. Cachaca 51 however, is decent if simple.

I feel that the aged cachacas work a lot better as sipping spirits as opposed to mixers. There are some artisinal versions that are spectacular!

I like leblon. That is one of only a handful of cachacas that are available here in VA. I too don't care for Pitu very much. Where did you get to attend the workshop? That sounds like an ass-ton of fun! Anyways, great updates lately and I look forward to reading more.

Yeah that's the tough part about cachaca- while it's possible to get about 12 different brands in San Francisco (where the seminar was held), most places only have access to one or two. Hopefully that will change in coming months/years.

Thanks for the informative and interesting post. =)
Greetings from Sweden.
BR,
Dino

There is a fantastic Artisnal Cachaca which this year has made its way to the states. It's called Cachaca São Paulo. I know it's in the DC, Va. md. NJ, and MA areas.
It's definitely a must try and we love to drink it as a shot.