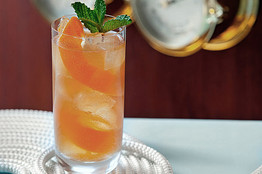 In the Wall Street Journal this weekend, Eric Felten has a story on Captain Morgan and other spiced rums. He lists a recipe for an imitation spiced rum from our own Martin Cate of Forbidden Island, plus a drink recipe in which to mix it.

Coincidentally, on Friday I was talking to Todd Thrasher of the speakeasy bar PX in Alexandria, Virginia. Thrasher told me that his guilty pleasure is Captain Morgan's. But he being the DIY king of cocktails, he not only makes his own spiced rum for the bar, he makes an imitation Coke with which to mix it.