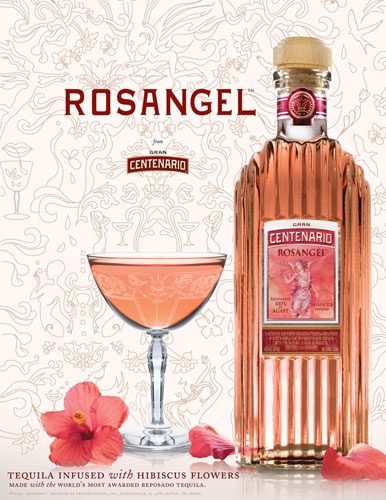 New Booze is an occasional introduction to new spirits on the market.

Gran Centenario's Rosangel tequila has already hit a few stores and will roll out for real in March. Unlike most flavored tequilas (not that there are that many of them) that are made from unaged blanco tequila, Rosangel has a base of reposado tequila. The standard Gran Centenario reposado is aged 10 months in French oak barrels (nearing the upper limit of one year for reposado), and blended with a little bit of older tequila.

Then to make the Rosangel, they further age it two months in used port barrels, then add hibiscus flavor to it. I had the opportunity to try this tequila, and it was much brighter than I expected- almost like a strawberry-dried berry-rose flavor, with the port wood coming in subtly underneath. It doesn't knock you out with excessive flavorings- it's definitely still tequila.

I had several cocktails with it. There are a few (largely unimpressive) ones on the website and Julie Reiner developed a few more that will be introduced as time goes by (the Ruby Fizz was particularly delicious). When experimenting with it, one bartender came up with a particularly good flavor match, and that's ginger.