What will take vinegar's place as the freaky new cocktail ingredient to sweep the nation? 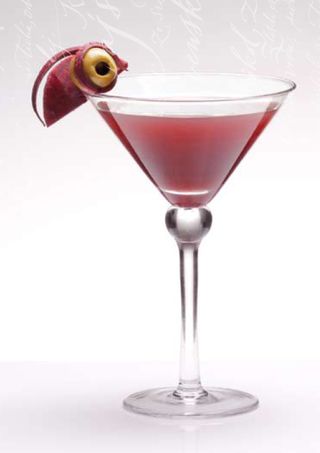 It could be beets. A couple of years ago I had my first beet drink, at Mint and 820, the Portland, OR bars where Lucy Brennan rules the roost. Soon thereafter, Brennan's book Hip Sips

came out with the recipe. The drink is merely beet-infused vodka with lemon-lime fresh sour mix. It's delicious.

That was the only beet drink I'd seen until a few months ago. In October, Double Cross Vodka was promoting a set of drinks including the Borscht Martini. It is merely muddled beets, vodka, and horseradish. (picture to the right, recipe on the website) I haven't tried it yet but I'm tempted because I also love horseradish. (And maybe I love horseradish because I love vinegar.)

Now I see Boston's Eastern Standard promoting a beet drink. The Russian Tea Room is described as "evocative of borscht," which isn't a slogan I'd have thought up. It contains vodka infused with beets (roasted this time), orange juice, tarragon, and spicy Greek yogurt. Freaky.

Or... is yogurt the new vinegar? It's served both at the Eastern Standard and in the Laughing Lassi at Dosa on Fillmore in San Francisco.

I LOVE beets Camper. Roasted Beet juice...mmm....
spicey cayenne salted rim, a fine Repo....yep, thats what you'll find on my menu soon.
Married with other roots veggies, put through a juicer, you can also have one mighty fine Bloody Mary.
I Call mine, "And The Beet Goes On "
..........
LOL !!!

Buttermilk is the next big thing. I'm calling that one right now.

In Portland, OR the Veritable Quandary serves an excellent twist on the bloody mary. The VQ8 features beet-infused vodka and a salt&pepper rim.