Fine Scotch Whisky, Not for Drinking 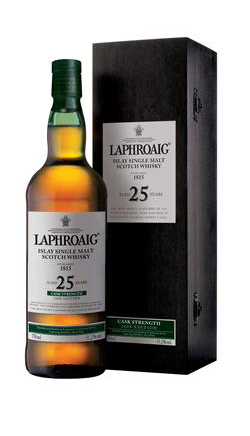 Usually when a whisky company releases a rare scotch, they pretend it's for drinking when they know it's going to sit on the shelf for 20 years in some rich person's collection.

An exception to this is The Last Drop, a rare blended whisky costing $2000. It was sold with a standard-sized bottle to keep closed and a mini of the same stuff to taste.

Now Jim Beam brands have released two scotches in the US that they're not even suggesting you drink. Laphroaig 25 year, which sells for $500, and Ardmore 30 year, which goes for $450.

I've had some older Laphroaigs and I love what happens to this smoky whisky with a long time in wood. Ardmore has traditionally been used for blending, though a much younger (no age statement) single-malt was released about a year or two ago. I had some older Ardmores at the distillery last summer and remember liking them a lot. 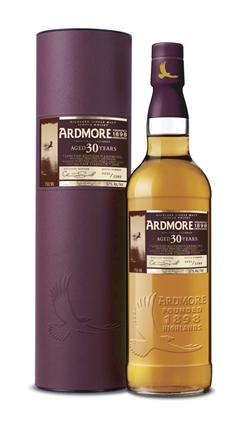 But if you read the press release, how much you like them is irrelevant. These are investment whiskies, we're told.

“Those looking for a bold investment with a strong finish should consider whetting their appetite with fine Scotch whisky,” said Stacey Simmons, senior brand manager, Laphroaig and Ardmore. “The rarity and exclusivity of Laphroaig 25 Year Old and Ardmore 30 Year Old is perfect for those who are looking to add to their collections or simply enjoy a rewarding single malt experience.”

Horde them, hide them in your cellar along with your guns and drinking water and canned food!

Or, you know, drink up. Life is short.

Unless these are limited I just don't see how they will appreciate markedly in the near-term..

The Ardmore is a limited edition- "Only 1,428 bottles, each individually numbered, are available."

For the douchebag who has everything? Really? How inestimably foolish...

I had a thought. Since these bottles are meant to cellar and not drink, how do we know that it's any good? They could be scamming people into buying the bottom of the barrel, so to speak.

Blair, I had the same thought. They're probably distilled water, caramel coloring (or colouring since they're Scottish), and smoke extract in case anyone dared try to take a whiff.

I can't believe I now have to think of Laphroaig 15 as the cheap stuff.

Just out of curiosity, how many people here think that selling people a product to not use for its intended purpose makes consumers question the value of your brand? Or, at least, your wits and common sense?

I think y'all may be taking the "not for drinking" thing a little too seriously. It's just the angle of their press release to match the economic climate.

They're sending me some, and you'll be happy to know I fully intend to drink it.

Glad to hear that you'll be drinking it, but it still sounds like a very bad idea for a campaign, and now it sounds like the "I was only kidding" defense has started up.

You're right, though, it's time to let this one lie and get on with life, but here's a parting thought...

American consumers are tired of thinking that advertisers treat them as if they were stupid. Somewhere in the back of our heads we've realized that we don't need 25 brands of premiumized vodka, that we don't care what celebrities drink and that booze shouldn't be treated as an "investment".

Age is no guarantee of quality in a whisky. Unlike wine, once whisky leaves the barrel and takes up residence in the bottle, its aging process ceases and it enters a kind of suspended animation. In this case the brand name is enough to suggest you won't be cheated. It is better to be well informed before we start collection.

Malt Whiskies require longer to mature fully than Grain Whiskies. 25years aging period is attractive. Your investment for resale is expensive and speculative. It will be interesting to find Scotch whisky is traded as a commodity in open market. Make a complete checklist of delivery date, company structure, total numbers of limited edition, certificate and demand supply gap.