With a slew of new bars opening in San Francisco over the past six months, I decided to go check a few of them out last week.

Unfortunately, I picked the wrong day to do it- a Monday. The first stop was Triple Crown, a lounge/dance bar/ restaurant in the former Octavia Lounge space. It was closed, but luckily they left the door open so I could pop my head in and have a look. The space is largely one room with plush banquet benches lining the walls, plus a smaller room for the bar/restaurant. There is no cocktail menu yet, though the person we spoke to said one should be coming soon.

Interestingly they have Taco Tuesdays and Thin Crust Thursdays with taco and pizza specials, respectively, but on Chilidog Disco night there are no chili dog specials.

Next up was the Tipsy Pig, the new Marina space that was also closed when we went, despite the website promising being open 7 nights a week. The sign on the door apologized and said, "we need a break" which from what I hear is true- apparently they'd been slammed since opening. Through the window, the place looks absolutely gorgeous with a tin ceiling, long bar, wooden chairs and tables, and library books in the back. The drink menu (here as a PDF) looks interesting if a bit schizophrenic. Gum syrup in everything!

Fearing a shut-out, we hopped in a cab and went to the newly-reopened Washington Square Bar & Grill, affectionately known as the Washbag. The place looks like the venerable old restaurant it once was, but unfortunately they haven't updated the bar program. There are only a few stools and not much place to stand behind them, no cocktail menu, and a bartender who shakes Manhattans instead of stirring them. In my opinion (that is right) unless they're packed as a restaurant they should think about removing or demoting the half-wall that separates the bar area from the first set of tables and emphasizing that section as a lounge.

From there, we eased on down the road to the newly-reopened 15 Romolo. I was there the previous week but after seven hours drinking at Heaven's Dog wasn't in the mood for cocktails at the time. This time we worked our way through half the menu, and the drinks poured by Scott Baird were excellent. I just wish the menu was online (or I made better mental notes) to share, but both the egg white drinks were delicious. The kitchen serves a small menu of fancy fries, burgers, and funnel cake.

Next up was Bloodhound, another hunting club-themed bar in SOMA. The spaced is prepped for partying, with some low furniture that can easily be pushed out of the way in case dance fever should spontaneously erupt.  The featured cocktails are interesting in that they focus on classics like the Planters Punch, Jack Rose, and Ward 8, yet the drinks are made in a sweeter style (heavy on the grenadine) for the non-cocktail-snob audience. I guess I have more respect for a bar like this that pours sweet versions of brown liquor drinks than for bars with all flavored vodka drinks. 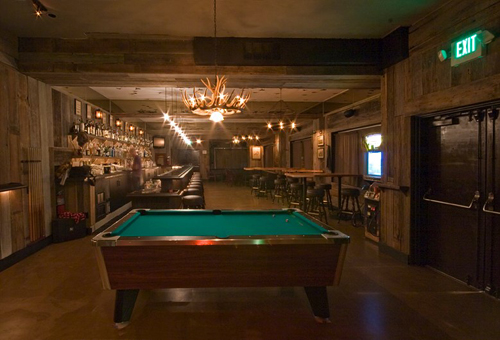 My last stop that night (two stops after I should have stopped) was the Bar on Church, formerly the Transfer. We arrived not long before 2AM and the place was absolutely packed. The new owners (formerly of the Bar on Castro) transformed the space from an awkwardly shaped dance bar into a high-volume mini-club by moving the bar against the wall and creating more space in which to disco. I do not recall if they had a cocktail menu (I doubt it) but I wasn't in the mood for further hard alcohol at that point.

After we were kicked to the curb at closing time, I hoofed it home and had many, many glasses of water.

it's a good thing the tipsy pig shut down for that day(s), because there's nobody in san francisco who could possibly help them, you know, run a bar.