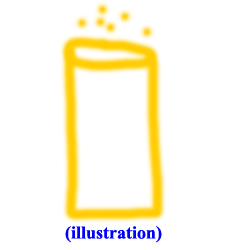 As I was saying in the last post, I had a stunningly delicious drink made by Neyah White of Nopa- one of the best cocktails I've had so far this year.

Please note that the picture to the right is not an actual photograph, but an artist's rendering of the drink.

It is amazingly original and complex and smoky and perfect. I suggest asking for it at Nopa- but you'd better hurry. Neyah says that they were only allocated four bottles of this batch of the Hangar chipotle vodka.

The chipotle contains separate infusions/distillations of smoked jalapeno and bell peppers, Fresno chili peppers, habanero peppers, and probably some other stuff. You can taste them all in the vodka. I had some of the jalapeno spirit right off the still a while back and damn it's tasty. Distiller Lance Winters produced 1500 six-bottle cases of the stuff in total. Yet Nopa received only four. Stingy.

Dear Lance Winters: This cocktail is a much better use of your fine new vodka than the Bloody Mary into which most people will dump it. Please send Neyah White more chipotle vodka.

I have had the Chipotle Hangar and it is one of my faves, right up my alley.
Salute !

Another option for people would be to come by Kuleto's. I just finished making Chipotle bitters, which are probably the best way to enhance a Manhattan or a Old Fashioned. A couple dashes goes a long way.