SF Pairing Battle: Recap and Next Round 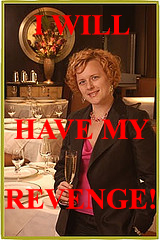 I was finally able to attend one of the Three on Five beverage pairing contests held at the Fifth Floor Restaurant in San Francisco. Information on previous battles is here: Round 1, Round 2, Round 3, Round 4, Round 5.

This one was an all-vegetarian meal and battle, with Emily Wines pairing wines, Beth Whalen of City Beer Store pairing beer, and Neyah White of Nopa pairing cocktails.

The event was just as much fun as I'd heard, with the judges explaining their pairing decisions before each course and the audience nerding out and comparing notes throughout the meal. And the drink pairing was fantastic. For some dishes the contestants would try to match the flavor in the foods, and for others they'd try to pair against it with an opposite flavor or texture.

Beer won one round, wine won three, and cocktails won one. But when the overall numbers were tallied, beer won the day. Go Beer! This was only the second time that Emily Wines has been defeated- and both times, by beer. Where my cocktail winners at?

Not surprisingly, cocktails won on my score sheet. I heard others saying the drinks were just too alcoholic to pair with food, but I am used to it I suppose so it didn't bother me in the least. And the biggest sensation of the evening was a cocktail by Neyah called the Escondido Romano. I'll post about it separately because it deserves attention. This drink was paired with an artichoke dish. Other standout pairings were Emily Wines' pairing of a beet salad with a grassy wine (Schloss Gobelsburg "Gobelsburger" Gruner Veltliner), and Beth Whalen's pairing of a Russian River Brewing Co's Consecration with a root vegetable and smoky cheese dish.

Anyway, I highly recommend this event. The next one is Monday, April 13th, again at 7PM. On April 13th, Emily will pair French wines against Italian selections from Wine Director Caterina Mirabelli (District) and Spanish wines from Master Sommelier David Glancy (PCI – Professional Culinary Institute). In addition to the wines, the sommeliers must also pair two of the five courses with “alternative” beverages or cocktails from those particular regions.

For reservations, go here or call 415-348-1555 to reserve your space. Make sure to specify the Three on Five event. The cost is $125 including all the 15 beverages and 5 course dinner. It's a total steal.

The question is: Can Emily Wines steal her title back?

[update 4/17/09]: The winner was Master Sommelier David Glancy of the Professional Culinary Institute in Campbell.  He was representing Spain.  He won against Emily (France) and Catarina Miribili (Italy) of District.