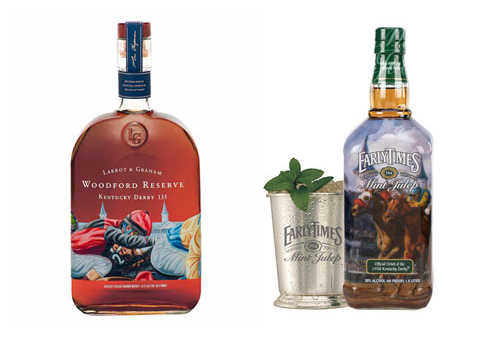 Limited-edition bottles in honor of this weekend's Kentucky Derby.

Woodford Reserve Bourbon is the “Official Bourbon of Kentucky Derby 135” and has served as the official bourbon for the past eleven years. Capturing the adrenaline-filled world of horse racing through the eyes of a jockey, Woodford Reserve, an award-winning small-batch bourbon, is honoring the country’s favorite horse race with the release of its limited edition 2009 Kentucky Derby bottle featuring artwork by retired jockey Tom Chapman.

In recognition of its “Official Drink of the Kentucky Derby” designation, Early Times commissioned renowned equine artist Celeste Susany to create an original oil painting of an actual scene at Churchill Downs® for its 2009 Derby bottle. 2009 marks Celeste’s 10th anniversary of painting the artwork for the Early Times Mint Julep commemorative bottle. Entitled “Dueling Towards Destiny”, this year’s painting depicts two powerhouse horses in stride racing towards the finish line with the Derby crowd and famed Twin Spires in the background. Launching in April 2009, the newly labeled one-liter pre-mix bottle will be available in limited quantities throughout the United States for a suggested retail price of $14.99.

Also, this year for the Derby, Maker's Mark is making their pre-mixed Mint Julep available to more places, including California.

Has anyone tried them premixes? Isn't that actually a no-go for quality brands like Makers Mark and Early Times?

I can't say I have much of an interest in these pre-mix products from a drinking-them side. I just like the limited edition bottles.

We have the green wax pre-mix Makers on the shelf at the Whisky Bar. Rob Samuels ( Bills son ) came by last week and introduced the goods to my staff. I RARELY do pre-mix stuff myself but this was actually okay. we'll be pouring it all day on Saturday for the Derby and have over 150 other whiskies to boot if you don't like juleps!