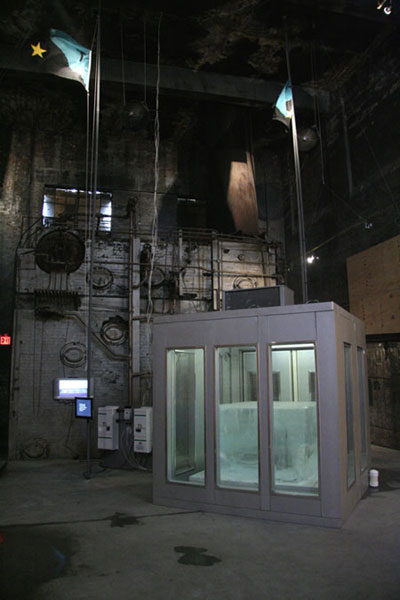 I saw this art review in New York Magazine of an exhibit at Boiler in Williamsburg.

In 2004, Strachan cut a 2.5-ton block of ice from the Alaskan Arctic, shipped it to the Bahamas (where he’s from), and exhibited it there in a hermetically sealed refrigerated room powered by solar cells. Pictures suggest that it was interesting there; now, installed in a former boiler room, it’s like hell freezing over. Far above the case two fans blow two flags: one at the current wind speed of Mount McKinley, the other at the Bahamas’ Nassau airport’s. The piece looks like a weird cryogenic chamber and touches on environmentalism, earthworks, entropy, autobiography, and race (making an oblique reference to Matthew Henson, a black explorer who was with Robert Peary at the North Pole).

It seems kind of ironic to ship arctic ice to the Bahamas and then Williamsburg to show the plight of global warming, but whatever.

I can't help looking at the picture thinking it would make a cool feature at a bar. Instead of the walk-in vodka freezer, you have a see-through ice room with someone in there hacking up a giant ice block for cocktails. For more ice ideas, see the Index of Ice Experiements on Alcademics here.