My Bartender Went to Peru, and All I Got was Bitters

A few months ago several San Franciscan bartenders went on a trip to Peru and Brazil and brought back with them samples, Peruvian bitters, and ideas for new drinks.

Borys Saciuk of Restaurant Michael Mina added a coca leaf-infused Pisco Punch to the menu, but has already replaced it with a lemon verbena Pisco Sour. He also added the Porto Alegre to the menu, a drink made with cachaca, marschino liqueur, Amaro Eole, pineapple gum syrup, lime juice, and egg white.

Walter Moore will start working with Cabana Cachaca and is starting a South American wine and spirits import company.

Steven Liles of Boulevard created a drink for the launch of Galliano L'Autentico called the Biscaccianti with pisco, Galliano, apricot eau-de-vie, orange and lemon juices and egg white.

Duggan McDonnell of Cantina added a Coca Leaf Sour (Pisco Sour with coca leaf infused pisco) to the menu, along with the Peruvian Cusqeña beer.

Dan "Mosto Verde" Hoyt from Taverna Aventine didn't change the menu (they already have a Pisco Punch on it), but notes that now when he hangs out at Cantina he drinks pisco and Peruvian beer instead of his usual.

And all of the bars (plus a few others, as they brought back gifts) now carry Amargo Chuncho bitters.

New drinks from Peru and Brazil: better than postcards. 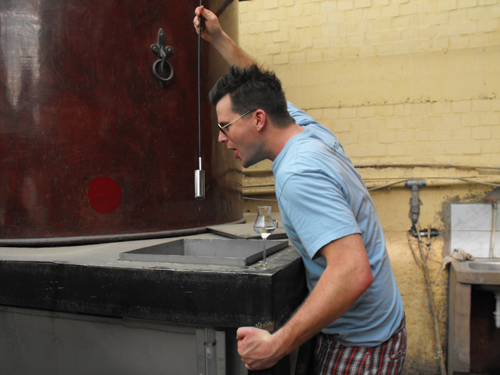