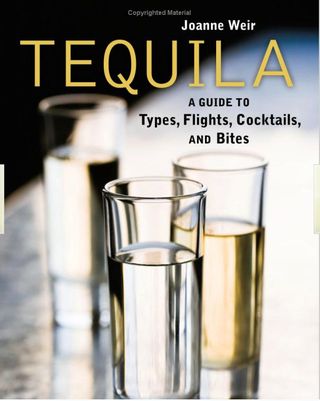 I received a review copy of Joanne Weir's new book Tequila: A Guide to Types, Flights, Cocktails, and Bites

. The book has a release date of Cinco de Mayo, but it's already on the market.

I noticed the recipes are fairly heavy on Chartreuse, Aperol, and egg whites, all of which are A-Okay with me. Most of the drinks are not terribly difficult, nor terribly obvious either. This is my favorite combination for a cocktail book- other than fresh herbs like rosemary and thyme called for in various recipes, I have most of the ingredients at home. Most of the time I drink tequila straight, but the recipes here will tempt me into experimentation.

There are about 24 food recipes with everything from appetizers to desserts, and I believe all of them contain tequila. It appears Weir developed all of the food recipes, which makes sense as she's a cookbook writer. As I hardly cook, this portion of my copy of the book will likely go unloved.

The beginning of the book is a history and introduction to tequila, with some facts that I wasn't aware of previously. Weir claims that tequila had its greatest gains in popularity during the Civil War, Prohibition, and WWII when supplies of other drinking alcohol were scarce. She also dismisses mixto tequila entirely, saying "Only a fool would drink mixto" and "You're basically buying a headache in a bottle." Nice.

Neither the history nor the production notes are as thorough as I would like and it seems at times she may be over-generalizing, but this is hardly the main focus of the book so it's hard to fault her for it. This one is all about the recipes and it looks to me like Weir did a great job of collecting them. Even the food looks good, so if someone wants to cook it for me, just let me know.

Very cute, I'll be right over to make you the quesadiilla with smoked trout and tomato salsa. Happy you like the book. Thanks!