Drinks With: Hamish Torrie of Ardbeg

This is the first installment of Drinks With, a new Alcademics category where I talk about what I talked about when having drinks with persons in the cocktails and spirits industry. Frequently I meet with brand ambassadors, bartenders, distillers, and other folks. I may learn a single bit of information or I may learn a lot. Drink With is the category in which I'll place my meeting notes. 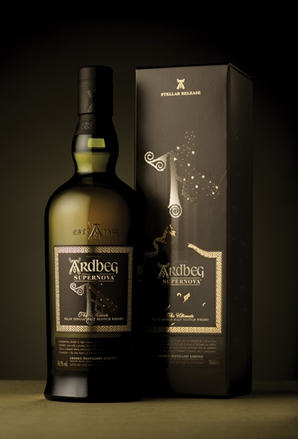 In May I met with Hamish Torrie, Brands Director at The Glenmorangie Company. Torrie works closely with Ardbeg, which is part of Glenmo (as we call it) and LVMH. We met for drinks and dinner at Epic Roasthouse, where we had a cocktail, some wine, and of course a touch of Ardbeg.

I've not had the good fortune to visit Ardbeg yet (hint, hint) but I have briefly met Torrie before, on last summer's trip to Scotland. We stopped into Glenmorangie distillery and tasted through both ranges.

Currently in the US, Ardbeg sells the 10 year old, the Uigedail (a non-age statement whisky matured in ex-sherry casks), and Airigh Nam Beist, which I believe is a 16 year old bottling that I haven't seen out west yet.

Ardbeg gets by on its rabid fan base. They have a part of the website called The Committee, which is better than the usual loyalty clubs in that they offer members access to bottlings not available to the general public. (He said this includes the US, which is usually problematic due to different bottle sizes, but they ship to a liquor store instead of to your house which somehow makes it okay.) Last year they sold Corryvrecken to Committee members, and this year they sold Supernova, which comes in as the second most heavily peated whisky on the market.

Torrie tells me that Supernova is now on the US market in very limited distribution, despite earlier plans not to release it publicly stateside. Corryvrecken will also join the standard range of Ardbeg in Europe later this year, and in 2010 in the US.

You can get the 'Beast' at John Walker & Co.. It has been available
here in SF for almost 2 years now.

We have the 'Nam Beist in Santa Rosa at Jack and Tony's Whisky Bar too. Damn good stuff that...