Chesterfield Browne has an awesome name and a pretty awesome job as the International Brand Ambassador for Mount Gay Rum. We met up for drinks at Absinthe a few months ago. (As you can tell, I'm catching up on some long-overdue Drinks With blog posts.) 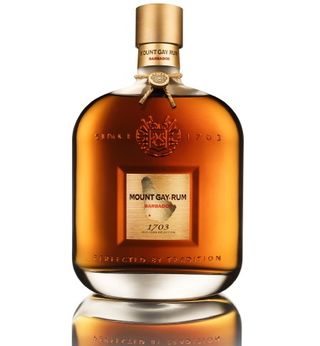 Mount Gay is made by blending some flavorful pot still rum into column distilled more neutral rum. The flagship product of the brand is the Eclipse (with 2-7 year rums inside), a slightly dark rum great for mixing.

The Silver Eclipse is a newer product, and clear. Browne tells me Bajans don't usually drink clear rum, so he has a job to do with the local market. In the US, people are more used to it.

The XO, or Extra Old, just changed packaging to a weightier, nice bottle, but Browne says the stuff inside (aged 8-15 years) is the same as ever. It also has a higher percentage of pot still rum inside than the Eclipse.

The newest line extension is the 1703, made up of rums from 10-30 years old. It will be a regular part of the Mount Gay portfolio as opposed to a limited edition. It costs about $100 retail.

One of the Bajan ways of drinking rum is with tonic water, and Browne says this drink is known as A Slap in the Face. That's an exciting name (almost as good as the other local drink the Corn n' Oil), but it seems a long way of saying rum & tonic to me.

Actually, Mount Gay Eclipse and Tonic is one of my summer favorites, and a nice switch from a standard G&T.