Juan Contreras is the son of Don Pilar, the guy whose name is on the bottle. He's also the brand ambassador and marketing director. I met him at Zazil for some tequila. 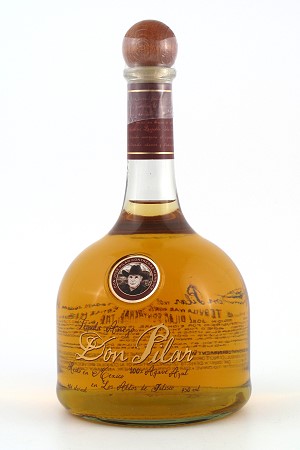 But really the story is all about Don Pilar. Contreras said his father had an agave ranch in Mexico, but moved to the US years ago and worked his way up from fruit picker to multi-restaurant owner. The tequila brand was launched in 2008 with just one product- an anejo.

Currently the second batch is on shelves, and Contreras says it's better than the first. The estate-grown agave is distilled in a distillery co-operative, owned by several agave growers. Rather than use the house distiller, for Don Pilar they bring in expert distillers to make it there instead. The pinas are cooked with an autoclave, the product is fermented, distilled in stainless steel pot stills, and it is aged in new American oak barrels instead of ex-bourbon.

Contreras says his father was trying to create something along the lines of Don Julio 1942, and the resemblance is certainly there, though it thankfully lacks the excessive vanilla flavor of DJ.

So far, the product is only available in Northern California.