Glossy Booze is regular Alcademics feature; a round-up of spirits stories in magazines.

Details (June/July) has a story on punch and places to get it around the country, plus a small feature on Hauz Alpenz products. 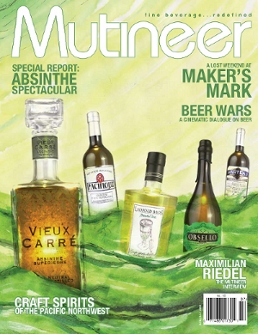 ReadyMade (June/July) has another story by Alex Day, this one on ice. Looks like some good advice on how to freeze and split a pan of ice.

Town and Country  (July) has a feature on new food and drink cookbooks for summer.

Mutineer (June/July) has a story on the movie Beer Wars, a feature on craft distillers of the Pacific Northwest, a big story on absinthe, a tour of Maker's Mark, and an interview with Max Riedel of Riedel glass. 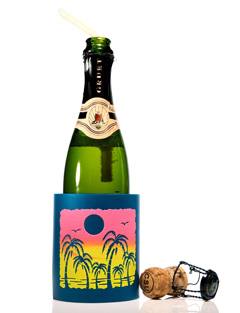 In Esquire (July), David Wondrich takes a break from writing about cocktails to tell us we don't drink enough champagne.

In Food and Wine (July), we have a recipe for Peach Sangria, a story on creating a wine list, a story on texture as a wine pairing guide, one on Argentinian wines, some recommended restaurants in which to drink wine, and the best beers for wine lovers.

Men's Journal (August) has a ton of booze coverage: recommendations for High West whiskey, Sam Adams Imperial White, and Firefly Sweet Tea Vodka, plus a story on four summer classic cocktails with a twist with recipes by Sean Muldoon of Belfast's Merchant Hotel, Chris Hannah or Arnaud's, Jamie Boudreau of Tini Bigs, and Jeffrey Mortenthaler of Clyde Common. There is also a recipe for an Heirloom Bloody Mary, and Jimmy Buffet recommends a drink that's just rum, coconut water, and a slice of lime.

Thanks for the mention on your blog! Another issue of Mutineer should be on its way to you.