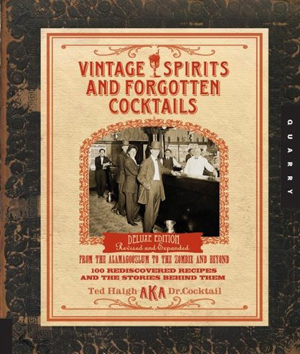 Several years before the craze in classic cocktails really took off, Ted Haigh wrote the book Vintage Spirits & Forgotten Cocktails that helped allow it to happen. The book was essential to learning about lost ingredients and drinks, many of which have now made a comeback. People have recreated the drinks and approximated the vintage spirits in the book since then, and new versions of old spirits have come back onto the market.

Since so many of the drinks are no longer lost, it was time for an update. And it sounds like Haigh did a doozy of a job on it.  Here is what's new in the new edition:

It just so happens that I am one of those 25 influential cocktail pioneers! (Am I having a good month or what?)

Haigh interviewed me via email a while back when he was rewriting the book. I have no idea what I said but it is probably useless information, full of typos, and long gone stale like unrefrigerated vermouth.

The book comes out July 1 and you can pre-order it on Amazon now:Vintage Spirits and Forgotten Cocktails: From the Alamagoozlum to the Zombie 100 Rediscovered Recipes and the Stories Behind Them

I'm a little anxious to see what picture I sent him.

We just got our copy today! Congrats on your section!