For some reason, the San Francisco Chronicle didn't choose the above title for my story that comes out Sunday August 30th. I can't think of why.

Camper English, Special to The Chronicle

Victoria D'Amato-Moran grows tomatoes, Asian pears, Fuji apples, blackberries, roses and many herbs in her South San Francisco garden. Sooner or later, everything in it winds up in her cocktails.

"Except the zucchinis," she says. "I haven't figured out how to use those yet." 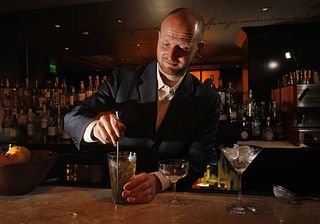 The Bay Area has long been home to the farm-forward cocktail movement - initially personified by Scott Beattie, then of Cyrus restaurant, who sourced produce from neighbors' fruit trees for his bar. Lately, more bartenders are doing the gardening work themselves, for the same reason that backyard gardeners seem to have appeared everywhere.

The extra effort may not save money, and the drinks may not taste noticeably fresher to the customer, but you can bet they do to the proud garden tender who grew part of your gimlet from seed.

Also: there's a recipe for Jacques Bezuidenhout's Sagerac, a version of the Sazerac made with fresh picked sage, and Scott Stewart's Lonsdale No. 3 made with fresh basil. 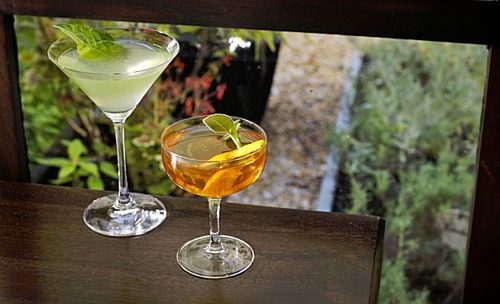 Hmmm...can't figure that one out either. Catchy headline that would have got some attention. I love it - just more of your genius!