In my last set of icesperiments, I froze, melted, and refroze (tap) water to see if it became clearer on successive refreezings. It did not.

This time I compared tap water with distilled water to see if one would freeze more clearly than the other. I froze it, then melted and refroze it four more times. Though neither froze super clear, there were differences:

The tap water seems to freeze either clear or not clear, where the distilled water freezes in more of a bubble starburst. But in the end I'd say there's not enough of a difference to matter.

After the break, a closeup of the distilled vs. tap ice. 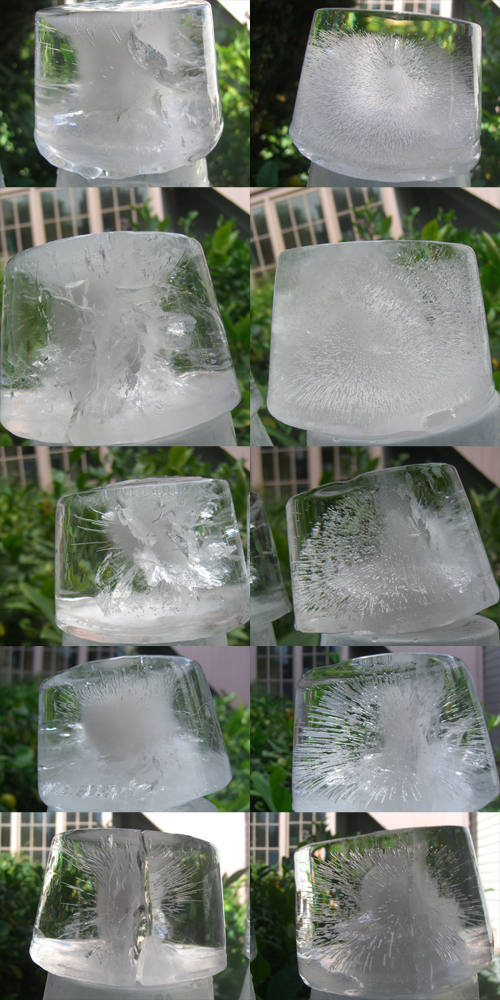 Nice ice blocks! (Who cares if they are clear or not?)

I make mine in little 7-ounce plastic cups (made by Dart) which gives me ice "plugs" of the perfect size to fit in an OF glass. And they freeze fast enough that I can make a lot of 'em in a day.

Occasionally I take an ice pick to split them into two when a recipe calls for "large ice" in the glass.

Here's something I've been thinking about trying: freezing my ice on top of a block of dry ice placed in the freezer. Seems that at a minimum it would freeze the ice faster and harder. Maybe better for shaking?

These are recycled take-out containers. For rocks glass drinks, I use individual applesauce containers that come in six-packs for school lunches. For individual drinks I don't care all that much (I'm not actually obsessed with clear ice, I would just like to figure out if it's possible) but it would be fun to get big clear ice blocks to work with. Then perhaps the next round of experiments will be home ice carving :0

Just fyi, the primary reason you get 'cloudy' ice has to do with the dissolved gasses in the water you freeze. All liquids contain a certain quantity of dissolved gasses, and this amount is based on the liquid's solubility for a particular gas. Solubility changes dramatically with temperature. As you freeze the liquid, the solubility decreases, and the gasses escape as bubbles. But since the ice in your freezer is freezing from the outside in, the gas is trapped within the block of ice and remains as a frozen bubble.

There are a few methods for eliminating the bubbles. (1) freeze the ice from the center outwards. This way, the bubbles that escape as the ice is frozen are able to escape through the liquid. (2) completely degas the liquid. The most effective way to do this, is to put the liquid under vacuum (reduced pressure). At home, the easiest solution is to boil the water, and then immediately freeze the water. Boiling the water dramatically reduces the amount of dissolved gases, and generally leads to clear ice.

Its nice to see the experiments! Hopefully you can try the boiled vs. unboiled experiment! Keep up the good work.

Have you tried to freeze ice cubes in layers? That's supposed to work...

I heard that if you use hot water and put it in the freezer right away, you get clear ice cubes.

I've done it before and have gotten clear-ish ice from it.