Drinks With: Steve Olson and Andy Seymour for Grand Marnier

Drinks With... is an Alcademics category in which I share what I've learned when meeting with industry notables.

Recently I went to an event for Grand Marnier hosted by Steven Olson and Andy Seymour, both of B.A.R. and akaWineGeek. I've been to a few Grand Marnier events before, but at this one I felt I learned a lot more. We were able to taste not just the three bottlings (the standard, 100 year anniversary and 150 year anniversary) but also the unflavored base cognacs used in those bottlings.

Grand Marnier has only three ingredients- cognac, sugar, and orange peels, says Olson. The Haitian orange peels are sun-dried then macerated in full-proof unaged cognac (aka neutral eau de vie, as it is not cognac yet). This is added to aged cognac and the combination is aged again. (I'm not sure at what point they add the sugar.) According to Olson, the only difference between the three bottlings of Grand Marnier is the age of the cognac at the time it's mixed with the orange eau de vie, and the length of time the mix additionally aged in French Limousin oak.

Historically, curacao was a popular ingredient in cocktails right after the "cocktail" was defined. Sometimes early cocktail recipes would list curacao as an ingredient, and often the "fancy" version of a cocktail (also with citrus peel included) did too. Eventually though, curacao was usurped by the popularity of maraschino liqueur and/or absinthe. If you added these to your cocktail, it was an "improved" version.  So:

Then we had plenty of cocktails mixed up by Andy along with Carlos Yturria. Here's Carlos in action. As you can see, it's all in the wrist. 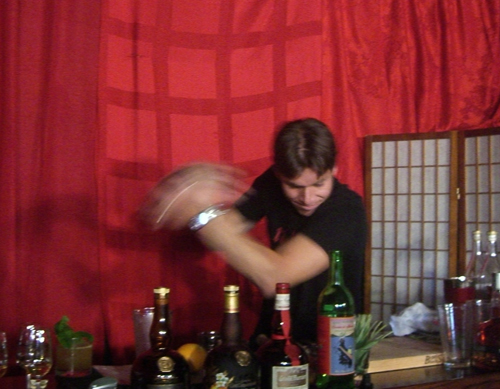