In an ongoing set of experiments I've been trying to make clear ice at home. I've tried:

With some success on the last one. While what would be ideal would be to produce one giant solid block of perfectly clear ice, I haven't figured that out yet. However if the ice is going to be used to shake with or for cooling individual beverages, you don't need a giant block- just big chunks.

There is a way to accomplish this by cutting corners. And tops and bottoms. We've seen how the air bubble makes the cloudiest part of the ice in the center in vertically-frozen water, and mostly along the bottom of horizontally-frozen water.

And I've also found that horizontally-frozen water usually has an edge of very clear ice. 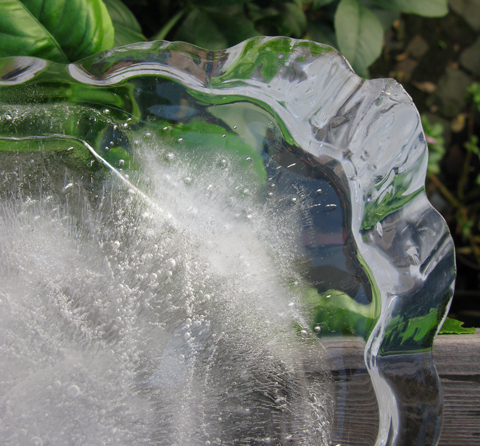 So with my ice pick, I just cut off the clear edges separated the top from the cloudy bottom
of the pan ice (easier than you'd expect, as the cloudy ice breaks off easily), and cut around the cloudy middle of vertically-frozen water to end up with a big bowl of clear ice. 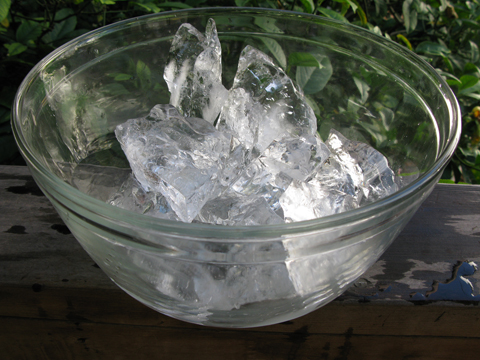 Conclusions: You can make clear ice by cutting around cloudy ice frozen in large blocks. However, you waste about 85% of your ice, and a lot of time.

For perfectly clear ice you need to cool the water very quickly, probably not going to happen in a home freezer. Try a commercial freezer that chills to below 0 degrees F, and use a relatively shallow pan. Good luck...

I can tell you how to do it, but it takes a lot of baby-sitting, and the larger the cubes you want, the more time it takes.
Just look at how a clear ice maker works. (Mine had some maintenance issues a while back and I spent hours hunched over with the front off watching it go).
All your experiments clearly show that the bubbles form once the liquid water is contained and has no where to expand.
The answer is to freeze your ice in thin layers, with a cold water as you can get. fill your ice tray with a quarter inch of water and let freeze. While this goes on, chill water as close to freezing as possible. Then when the layer is frozen solid, pour another layer on top, and freeze again. Keep it up to desired depth.
Keep track of the amount of time you spend on this, the value of your time, and the amount of freezer space you devote to enough trays to keep up with a cocktailian's insatiable demand for ice, and you'll understand why I bought an ice maker....

Oh, and one more thing: I've really enjoyed this series!

After reading this series(very intereting indeeed)i have found that for me the cutting corners is probably the most easy method to use and then only if clear ice is needed for say photographs.

An ice maker is out of my economical reach so i`ll have to live with the usual ice but at least i can make square ice cubes!

Hey, if your going to bother cutting corners then try pulling the block out of the freezer before the center freezes. Sure you will loose a bit of ice in the middle, but I bet with a little patience you can figure out when to opimal time is to pull the ice. Then you could set a baking timer. "Ding! Honey....I think the ice is done!!"

This is an awesome series. Thanks for taking this time to do it! After some similar but equally failed experiments, my brother and I are thinking of experimenting with the following setup:

Boil distilled water, pour it into ice trays while still hot. Put the ice tray in a cheap hand-pump vacuum container (sold as a meat marinating solution: http://www.amazon.com/Vacu-Vin-2977450-Marinating-Container/dp/B000H8BGTY), pump out as much air as possible, and freeze.

I'll let you know if this succeeds. I am guessing it may not because the pump is not strong enough to make a real vacuum, but, we'll see.

Perhaps you could post tips on breaking up ice into chunks? I am betting most of your readers (like myself) have not handled an ice pick or a large block of ice before.

Andrew- the breaking up of ice is easy: ice pick or hammer and screwdriver. Done! I have heard that people use plastic knives to cut more regular pieces. There are also professional ice carving tools for this, but the kits I've seen are incredibly expensive. I'm fine with irregular edges for now. After we figure out how to get it all clear, who knows...

he is right the cloudiness is caused by disolved gasses. warm water holds more dissolved gasses than cool water. If u want a large clear cube of is...or cubes, i believe the cure is to chill the water and keep it from freezing until the gasses can escape. One way to keep water from freezing is to keep it moving.

Yep, an update (and solution) is here:
http://www.alcademics.com/2010/08/a-homemade-giant-crystal-clear-ice-cube-tray.html