I have been doing experiments at home to try to get the clearest ice possible. So far my experiments have compared:

I have not yet had success. Will the third time be the charm?

(*Update - You might want to skip to this index page to see conclusions reached after many experiments.)

This time I compared hot water to cold water to see which would freeze more clearly. The theory is that hot/boiled water has less trapped oxygen in it, and thus will freeze clearly because there will be less air bubbles.

As I previously saw no significant difference in ice clarity between using tap vs. distilled water, I began with unfiltered tap water. One batch of water I left at room temperature. The other batch I boiled for several minutes. I put them in the freezer while the hot water was still hot. Here is what happened on three separate attempts: 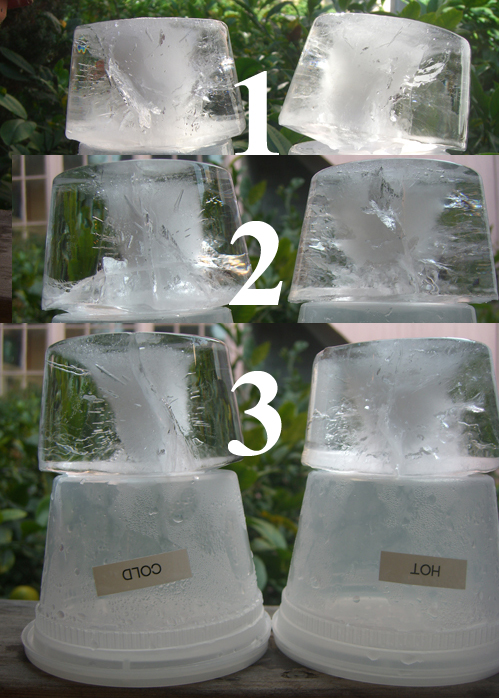 The cold water actually looks a little more clear, but this could be because when the center of the hot water finally froze, it burst. I can't guess why this is because it's not like I have a super refrigerator that freezes ice in ten minutes.

Another theory about why the first experiment failed is that as the hot water cools down in the freezer, it reabsorbs oxygen and acts just like cold water. To test this, I repeated the experiment, this time covering both plastic tubs with the lid before freezing. 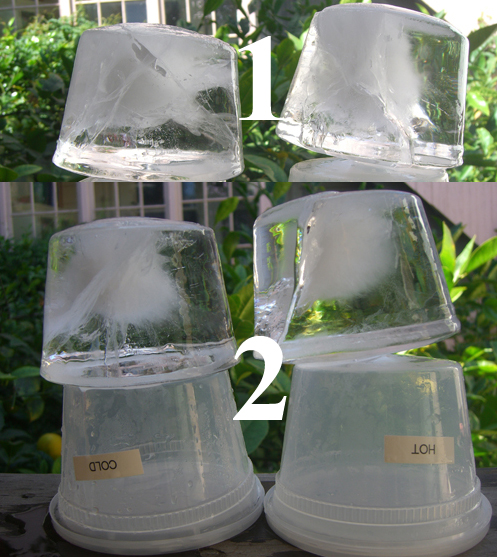 Here the hot water ice looks slightly more clear than it did when it was uncovered. However, I'm not seeing a significant difference in hot vs. cold water, though the covered hot water may be just slightly clearer.

Conclusion: Hot water does not freeze significantly clearer than cold water, even when the vessel is covered to reduce oxygen re-absorption.

In all of these ice experiments so far, the major cloudy factor in the ice has not been cloudiness throughout the ice, but a cloudy spot in the center of the ice. This spot is assumed to form due to the order in which ice freezes, from the outside-in. The oxygen migrates to the liquid part (in the middle) until it is the last part to freeze.  Kold-Draft ice machines produce wonderfully clear ice cubes in part because they freeze the ice in layers- water is sprayed in layers from the top down, so that oxygen is never trapped.

Is there a way to freeze ice in a home freezer similar to a Kold Draft machine? Can we manipulate the way water freezes or change the shape of the container? Can we vibrate the container or stir the water so that the surface stays liquid and freezes last?

We shall see, in future ice experiments.

*Update - For a solution to the ice problem, see this post for a method that works. Also, an index of all of the ice experiments on Alcademics can be found here.

How much air was left in the container after sealing it? Could you submerge the container in a large bowl of hot (and cold as a control) water and then cap it (true, expansion as the ice freezes will probably pop off the top).

What about vacuum sealing water to remove the air? You can make a vacuum apparatus using your sink and some hoses (uses the Bernoulli effect)? Some of the home canning equipment I've seen also lets you pull a vacuum (albeit a minor one that might not de-gas the liquid all that much) before sealing.

I'm going to disclaim any expectation of this working, but the theory I've heard is that to make clear ice, you bubble air through it while it's freezing. This provides the convective agitation needed to keep the top from freezing before the rest of it. It'd be easy if you have an aquarium pump laying around...

The reason you are getting cloudy centers is because the ice is freezing from the outside in, pushing the impurities and air towards the center.

Clear ice, such as clinebell make their ice clear via a continuous freezing process in which the cold water is continuously flowing over a chill plate causing the ice to freeze from the bottom up.

It will be pretty hard to achieve this at home unless you do a mcgyver rig in which you have a water pump, chill plate and insulated container.

Frederick- good call on sealing the cap underwater- it's worth a shot. Kenneth- I think the 'keep the water moving' theory is sound, but not so sure about the methodology. I tried something that I'll write about two posts from now- coming soon...

Enjoying your experiments..new to your site, and look for ward to reading more...

The closest I ever got at home to clear ice is boiling the water two or three times before freezing...worth a try to add to your research...be curious how it works for you.

After boiling the hot water did you pour it into a different container? Wouldn't that pouring process reintroduce the air that you just boiled out? Do you have a pot that you can boil the water in and then carefully (after it cools) put that same pot of water in the freezer?

Would this be different than what you already did?

I did transfer the water after boiling. I believe that the water reabsorbs air while cooling, and thus transfer doesn't matter- but I could be wrong about that.

Someone suggested using a sealed pressure cooker to prevent air from getting in after boiling. That's something I'd try if I had one.

I use Reverse Osmosis water in my ice maker. The R.O. reservoir tank does not have any air in it that can contact the water. I suppose the water must be in a bladder of some sort. The ice that is made from water directly from the reservoir tank is perfectly clear. After the first few ice making cycles, the ice is bubbly white. The gases absorbing into the water are the source of the white in ice.

I remember a hot it's made episode that covered ice sculptures. How they made a giant block without air bubble is have a pump on either side of the tank that circulates the filtered water in the tank. The water on the bottom freezes while the impurities are flowing on top.

Yes - This is an early post in a loooong experiment. There is now an index of all the ice experiments here: http://www.alcademics.com/index-of-ice-experiments-on-alcademics.html

Where we figure out ways that work for clear is both in machines -as you mention- and at home. Thanks for the reminder that I need to link to the index on this page.