I met with a stack of Bowmore scotch whisky folks for lunch and a tasting at One Market: Eddie MacAffer, Distillery Manager, Andrew Rankin, Master Blender and Operations Director, Jamie MacKenzie, Regional Manager, plus Robin Coupar, US Brand Manager for several of the whiskies in the Skyy Spirits portfolio.

Bowmore is an Islay whisky and one of only five remaining in Scotland where they malt their own barley. (Not all of it, but they say more than most.) Malting is process of preparing grain for fermentation. Barley is brought in, soaked in water to begin the process of germination, then dried with hot air to halt it. This exposes the starch granules yet preserves the enzymes in the barley that will be needed in fermentation.

At Bowmore they dry the malt with a combination of hand-cut peat that adds the characteristic smoky peaty aspect to Islay whiskies, and hot air for the first 15 hours. Then they finish the job with hot air without peat to keep the smoke level in check.

Here's a photo of the malting floor that my pal (and now 2009 Lowell Thomas Travel Journalist of the Year) Joe Ray took: 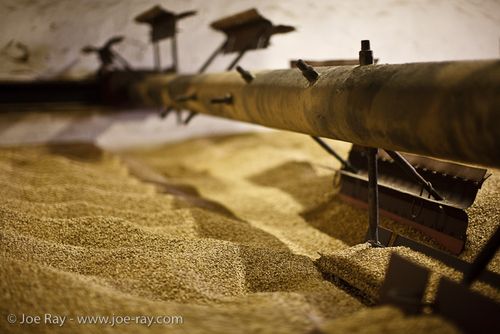 So much for points of differentiation: It was time for drinking. We started with the 12-year-old, then moved on to the 15. The 15-year-old is just the 12 additionally matured in Oloroso sherry butts for three more years. I'd tried these expressions before but was really looking forward to the older stuff. When Islay whisky is aged for a long time it loses a lot of its smoky qualities while retaining some other maritime influences and gaining new qualities. The 25-year-old was like liquid chocolate; just delicious and rich. 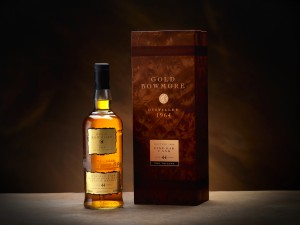 But the real treat was the opportunity to taste the Gold Bowmore. This is the third in a line of very old and very expensive releases. The Black Bowmore was 42 years old. The White Bowmore was 43.

The Gold Bowmore, which will be released soon, is 44 years old. And damnnnnnn it's good. It's completely different from the earlier expressions- grapefruit, salt, almonds, and marzipan initially on the nose, opening to more rich, dried fruity flavors. And on the mouth! chamomile, papaya, yellow raisins, banana sandpaper, fino sherry, heaven. Merely listing flavors doesn't do this whisky justice- it is so bright and alive. Hell, I'd love to feel that fresh at 44 years old!

I have tasted a few other whiskies this expensive ($6250 per bottle) but never anything anywhere near this delicious. I'm still a little bit tingly.

Banana sandpaper? Best tasting note ever. Hopefully I'll get to taste this fine whisky sometime and know just what you're talking about.