A few months back I had a very long lunch with Francisco Alcaraz, Paton Tequila's Master Distiller and Blender at the restaurant Kokkari in San Francisco. Alcaraz is not only the current master distiller, he created the recipe for Patron. Alcaraz studied chemical engineering at the University of Guadalajara then went to work as an inspector for an organization that was sort of a precursor to the CRT, the tequila regulatory commission. After that he went to work in a distillery and as a tequila consultant.

Alcaraz developed the recipe for Patron at the distillery Siete Leguas (another brand still producing delicious tequila), where Patron was made from 1989 until 2002 before building their own distillery. Siete Leguas had both the traditional tahona (a giant grinding stone that crushes baked agave before fermentation and distillation) and a mechanical shredder (roller mill) that accomplishes the same thing, though these produce tequila with different flavors (and the topic incites long tequila nerd arguments). Patron uses a combination of tahona-crushed and shredded agave in its recipe.

Other differences from Siete Leguas' recipe include the type of yeast used and the source of the agave.

The agave for Patron all comes from the Highlands of Jalisco, but it is not estate-grown. (That would be a darn big estate!) Alcaraz says they have contracts with seven large growers, and they do buy other agave on the open market. Another brand told me that they were required to buy some agave from small producers, but Alcaraz says that there is no requirement. There is, however, an incentive: The government (not sure if local or state) subsidizes part of the price of the agave to support these smaller farms.

Furthermore, Patron has long-term contracts with their growers to ensure that they will not be susceptible to the frequent agave market shortages that take place in cycles. (Another way they're preparing for future shortages is to store extra tequila in large stainless tanks to be bottled when needed.)

After agave is delivered to the distillery, it is slow roasted in brick ovens (compared with faster autoclaves that some brands use), fermented in wood fermentation vats, and double distilled. Contrary to industry gossip, Alcaraz says that Patron distills all their own agave, and it is all made at their facilities. 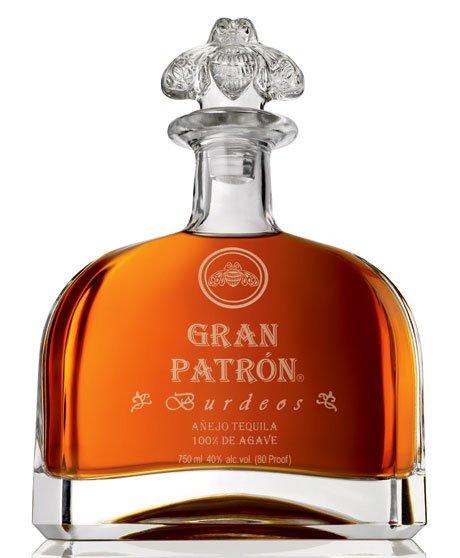 Beyond the regular Patron range, they have two super-ultra-mega=-expensive premium options: Gran Patron Platinum and Gran Patron Burdeos. For the Platinum, they use agave with the highest sugar content, triple distill it, and age it in a large new, uncharred oak tank for one month.  The Burdeos is made from the same raw material as the Platinum, but is aged one year in American oak, then redistilled, then aged 10 more months in French oak, then finished in an ex-Bordeau wine barrel for two more months.

not because it's not good, but because it's too good. He says it makes tequila taste better than it is. "If there is something wrong I want to taste it!" he said.

He also said something I've never heard before: that tequila improves in the bottle. That's a surprise, but one I don't think I'll ever be able to test- not only do you have to have a long and great sensory memory, I can never wait around while there's a bottle of tequila nearby.

I've been told that Patron is not sold in Mexico seeing that it isn't bottled there. Do you know if that's true?

Jared- Patron is bottled in Mexico. In order to be 100% agave tequila, by law it must be distilled and bottled within the designated region of Mexico. Mixto tequila is often bottled in the US though.

That said, Patron has not traditionally been sold in Mexico. I'm not sure if that has changed, but it was definitely developed for export.

It is common knowledge that Patrón owns 3 other distilleries besides their own Hacienda del Patrón.

Patrón is not sold in Mexico. Instead, they concentrate on the Duty Free market. They state in their PR materials that they are currently available in 100 islands and countries around the globe.

That is one hell of a tupee.

Patron is finally going to be sold in Mexico:

is not a tupee,is the leftover from the agave plant

hilarious Chero, gave me a laugh for sure!