The other week John Gakuru, jet-setting (seriously his Facebook updates are from a different country every couple days) international brand ambassador for Sagatiba cachaca, gave a talk at the Palace Hotel in San Francisco. 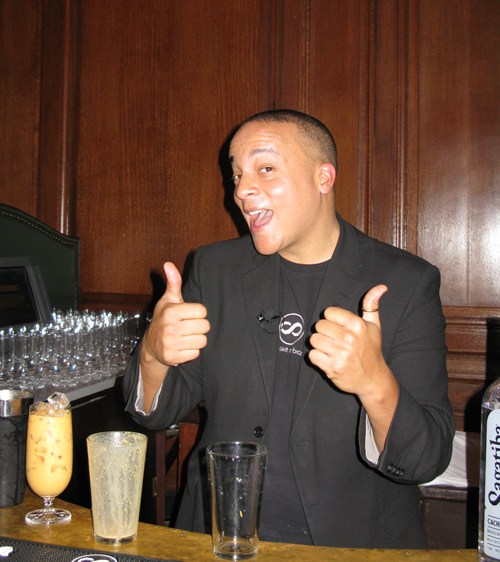 Cachaca, as we know, is a type of rum (as defined by US laws anyway) made in Brazil from fermented sugarcane juice instead of from molasses, which is the by product of sugar production. The brand Sagatiba has been making a big marketing push internationally and seems to be in the top three high-end cachacas catering to mixologists, along with Leblon and Cabana.

Sagatiba has an unaged ("Pura") and an aged ("Velha") bottling on the market, in addition to an incredibly limited edition called "Preciosa." Each of these products is made completely different from the others, with the only common thread being the Sagatiba name.

The Pura is an example of high-tech distillation, and since I'm a nerd that seems cool to me. They take column-distilled cachaca made into a high-alcohol 'concentrate,' then water it down and redistill it again in another column still. This second still has four separate condensers on it, allowing for some of the resultant product to be pulled off and redistilled additional times. The finished cachaca comes off the still at bottle strength so they do not add water before bottling, and don't add any sugar to the product either though some is permitted.

The Velha is a more agricultural product, made from hand-harvested sugar cane and distilled in large copper pot stills with a natural "cracked corn" yeast. It's then aged for 2-3 years in ex-Jim Beam barrels before bottling. The Velha is a new product on the market so it may not  be in all areas yet.

The Preciosa is a ridiculously rare and expensive bottling. A distiller put 10,000 liters of cachaca into five giant cognac mixing casks (2,500 liters each) in 1980 to see what would happen, but then died in 1982. Over 20 years later in 2006 the Sagatiba folks pulled it out, filtered, and bottled it. There were 3,300 liters remaining out of the 10,000 and once it's gone it's gone forever.

In the seminar we had a bunch of drinks ranging from the awfully simple (also: awful) Sagatiba and Sprite to the more sophisticated Pumpkin Batida. Gakuru was emphasizing the range of drinks that can be made with cachaca, specifically that you can make more than a Caipirinha with it. He said, "It's not just about lime and sugar anymore."