Lady Gaga's new video "Bad Romance" has some product placement in it, this time for Nemiroff vodka. I usually don't care about things of this nature, but when Lady Gaga does something it's good to pay attention. In her previous video for LoveGame, people were apparently drinking Campari out of the bottle on the subway while watching Gaga dance. How this impacted sales of Campari I do not know.

In Bad Romance, we get a flash of the bottle in the beginning then a second shot of it being poured into a glass around 2:28.


(If you can't see the embedded video, click here.)

I did some internet sleuthing to find that this bottle is Nemiroff Lex. The Nemiroff vodka website says, "Nemiroff Lex is the vodka for the Great, the Successful, the Courageous, for those who change this world and hold it on their shoulders." 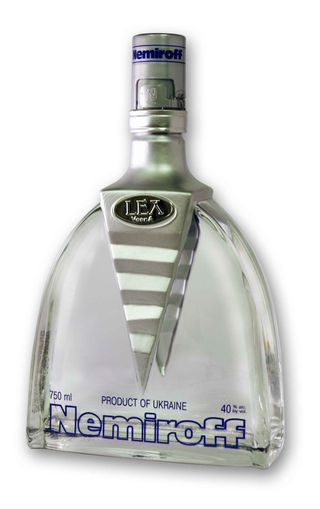 A hint of the production is in this poorly translated section (with my bold-ings): "The delicate bouquet, emphasized by the linden-tree blossom flavour, inimitable irreproachably mild taste… The alcohol used in its production is aged for up to 6 months. Besides the classical vodka purification technologies, the water-alcohol mixture that is used for production of Nemiroff Lex undergoes additional processing with a specially prepared adsorbent." I'm guessing the "adsorbent" is additional filtering.

Additional information on the branding of Nemiroff from 2003 can be found in this story on brandchannel.com. It's a Ukranian brand that Wikipedia says, "At the end of 2006 Nemiroff became the 'second largest vodka producer in the world' (by sales), trailing only Smirnoff." Guess those sales must be outside the US.

Anyway, that's what I can find for now.

P.S. How many outfit changes are in this Lady Gaga video, like 35?

Actually I rather like Nemiroff Lex - decent stuff and cheap enough. Have to get around to reviewing it on of these days.
If you like good Russian Vodka (with humorous literature attched) check out Regalia Gold (http://www.spiritsreview.com/reviews-vodka-regalia-gold.html)
although the regular Regalia is quite good and 1/2 the money . Same goes for the regular Nemiroff.

Cool- Thanks for the information Chris!

Did not know that about filtration grades. Good info, thanks!

Nothing to do with vodka, but Lady Gaga certainly has some of the oddest videos ever passed off as pop pablum. Ending scene on that one alone of her on a bed with a rotting corpse...

Nemiroff's biggest market is actually Russia, followed by the Ukraine. You're right that the figures you found are mainly regional sales in these two countries. They've been trying to push exports though - especially in the UK - over the last couple of years.

The company does produce a couple of other vodka brands for their home market, too. Nemiroff is their premium range.

GAGA has the best shoes. must be the best vodka. (that's logical, no?)

why are they pushing alcohol so much? I see this in pop music everywhere now and to a degree I've never seen before. as far as highs go, it's the worst. makes you slow and stupid, or for some people, violent. is this being done on purpose?

En realidad, yo, desconocía de esta marca now i know about that name Nemiroff vodka and i'd like to buy just one bottle. I'm to Barcelona, spain.

Nemiroff was already a great vodka, I guess Lady Gaga just added the chic ingredient to its recipe.

Im ukrainian and im proud that our vodka is becoming so populuar over the world. We are the best!!!