Glossy Booze is a regular Alcademics round-up of booze stories in magazines.

(November) has a story on underappreciated red wines. 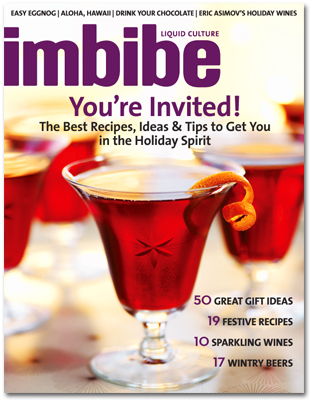 Imbibe (Nov/Dec) has recipes for homemade eggnog, drinks with figs, and party drink recipes, a comparison of witbiers, a story on Greg Boehm of CocktailKingdom.com,  one on barleywine, another on bargain sparkling wine, fancy hot chocolate, and a travel piece on drinking in Hawaii.

(November) has stories on ten Thanksgiving wines, new wine books, a recipe for mulled wine (to use with leftover bottles), American ciders, and $10 holiday wines.

Delta's in-flight magazine Sky's October issue has a round-up of wine and food festivals, and a big feature on visiting the world's best wine regions.

Sunset (November) has a round-up of spirits new spirits distilleries in the west, lists their annual Wine Awards, and lists a recipe for kumquat digestif.

(November), in addition to the story I wrote on avoiding hangovers, has a few recipes for simple cocktails.

Esquire lists recommended single-malts from Scotland's islands, Highlands, and Lowlands, and adds two new bars to its best bars list: One Flew South in the Atlanta airport, and Dutch Kills in Queens.

(November/December) Alex Day shares sherry knowledge and there's a project on making a rolling bar out of an old trunk.

And the winner for best booze coverage this month goes to Conde Nast Traveler (November), with its this huge round-up of 38 bars in New Orleans' French Quarter. 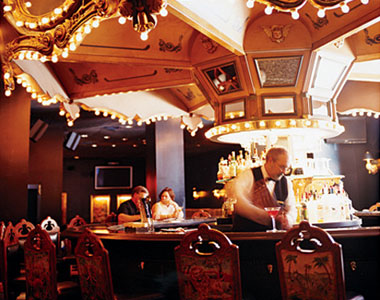 Agree with esquire about One Flew South airport bar at ATL atlanta international airport... it truly is a cool bar and you won't believe you're in an airport, let alone the busiest airport in the nation. Highly recommend checking it out if you happen to be flying to ATL... Cheers!