Out now from Chronicle Books is Spice & Ice

by Kara Newman. Newman is a columnist for Chili Pepper magazine, and as that and the title would indicate, the book is full of recipes for cocktails with various hot spices. 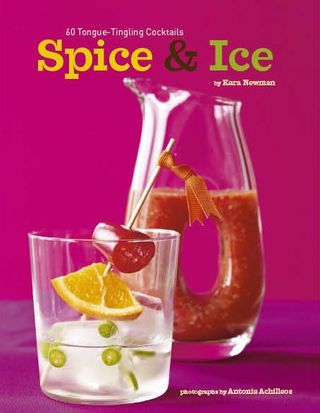 The book's first section holds a lot of information on spices generally, using spices in cocktails, and many tips and techniques for getting spicy flavors into infusions, bitters, garnishes, and liqueurs. For a book of its (small) size this is a pretty large section, making it one that could be quite useful to people who want to experiment with creating their own drinks in addition to following the recipes in the rest of the book.

The recipes are arranged by season with ingredients fresh to the season or appropriate to be consumed during the season. Some of the drinks are simple spicy additions to known cocktails, such as a Mint Julep with added jalapeno pepper and a jalapeno infused Vodka Martini. Others are more complex and intriguing.

I was particularly interested in the 24 Carrot Cocktail, created by Ryan Magarian and made with horseradish-infused vodka, carrot juice, and mint; the Spicy Pisco Punch invented by Tim Stookey of San Francisco; the Zapple with habanero-infused applejack, whiskey, amaretto, and lemon juice; the Scotch Bonnet by Eben Klemm with habanero-infused scotch and pineapple juice; and the Tandoori Sunrise, made with tamarind, tandoori spices, tequila, ginger liqueur, and orange juice.

I don't see too many obscure ingredients in the recipes, making most of them easily doable by anyone in the country. The book has a good balance of easy-to-adapt drinks that you know with interesting-sounding ones that you don't. I have a particular sweet spot for drinks that are spicy/cool- gimlet with a hot rim or a hot drink with a sugar rim, so many of these cocktails are right up my alley.

Here is a recipe from the book:

The luscious purple color of this drink is a stunner!  Taste a berry first to check for sweetness; if it’s not super-sweet, add a tablespoon of sugar when muddling the berries.

In a cocktail shaker, muddle blackberries and poblano peppers. Shake together with tequila, Cointreau, and ice, and strain into a martini glass. 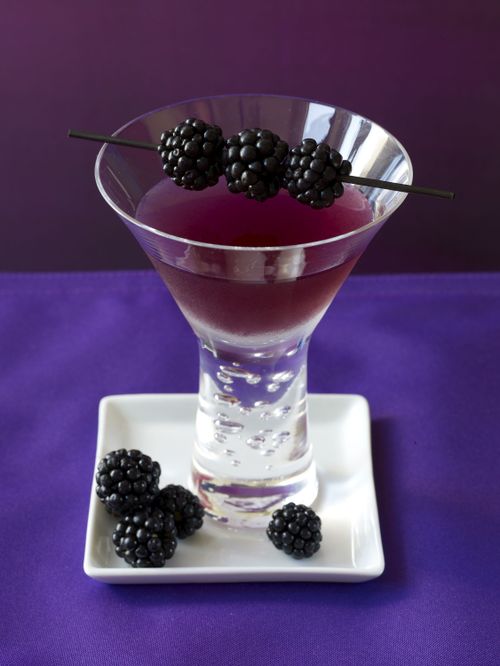 Want to win one of five copies of Spice & Ice by Kara Newman? Sign up for the Alcademics A-Plus email list and you'll have pretty good chance of doing so. The contest will run the weekend of November 6th, 2009.

Too cool! I've been looking lately for more information on infusions and getting the spice cabinet out of the kitchen and into the bar. If I don't win a copy of the book (*fingers crossed*) I'll definitely have to order one...

Camper, If you like spicy/sweet drinks you should try the Macho Margarita at Colibri. We roast a jalapeno in a flaming dish of Cointreau, blanco Tequila and a little 151 for fireworks. We then muddle the pepper, add the liquid from the plate to the glass over ice, top off with more blanco Tequila, add lime juice, simple sugar and shake. It's a perfect combination of sweet and hot. Patrons LOVE it.

I made this drink last night. I wonder if she omitted lime juice? It was missing a little something, and there's less than 2oz of liquid total.

Also (and I realize that this is going to make me sound like a cranky grandpa), "1 tablespoon" isn't exactly a particularly helpful measurement for globular things like blackberries. Couldn't she have said "three large or five medium-sized blackberries"? I'm trying to picture someone actually trying to measure them out.

Definitely a promising cocktail, despite my nitpicking!