Herbsaint is an absinthe substitute introduced after Prohibition. It was important in the Sazerac and other cocktails until absinthe was re-legalized in the US in 2007.

A new bottle that looks antique will appear on liquor store shelves this week. In honor of the 75th anniversary of Herbsaint, the local Sazerac Company dug into its archives for the original recipe and recreated the absinthe substitute first sold in 1934.

The story says that the proof will be raised back to 50% ABV and that instead of using extracts in neutral alcohol, they will dip herbs into alcohol like a big tea bag.

Absinthe (good absinthe, anyway) is made by adding the flavoring herbs into the still and redistilling alcohol. Then most absinthes (verte, or the green ones) have additional herbs added after distillation, which gives them their green color.

Some bartenders say that they still prefer Herbsaint to absinthe in a Sazerac,so we'll see what they think about the new bottle. Herbsaint does have one large advantage over absinthe- the price. It comes in at around $20/bottle as opposed to $50 or so for absinthe, but as you use only a dash or two that may not matter too much in the long run. The new Herbsaint Original is set to retail for $34.99 according to the story. 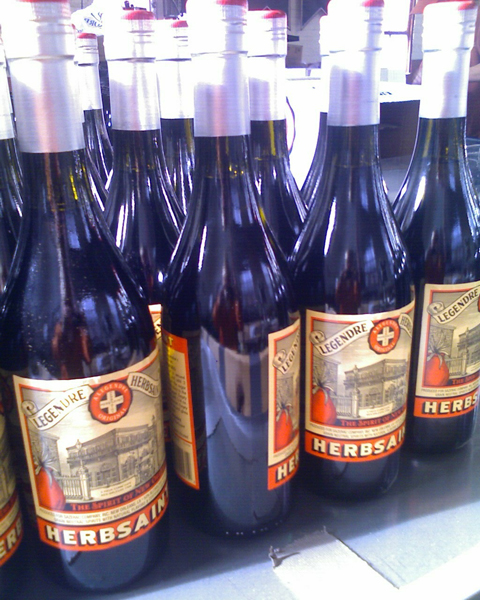 This is good news. Real ingredients, opposed to extracts, and higher proof hopefully means a tastier version of the Herbsaint we're used to.

I have been surprised to find myself reaching more for the Herbsaint bottle than the absinthe, so I, too, will be very interested to see what the new product tastes like. Do you have any idea if this is a temporary commemorative release, or a permanent reformulation of the product?

Doug, I do not know if this is a temporary or permanent release, or actually anything more than is in this story. The Sazerac company has not even sent out a press release about this product yet and doesn't even have a bottle image. So I guess we'll just wait and see...

This is good news for Herbsaint drinkers...

The Herbsaint Original is an addition to Sazerac's line up, both version will be available.

Herbsaint Original will give people a chance to experience what Legendre Herbsaint tasted like back in the 1930s and 1940s.

It tastes excellent, and I have tasted both vintage Herbsaint, and the new revival of Herbsaint Original.

Sazerac did a good job bringing back the old style Herbsaint.