Remember in June when I received pretty much the best press kit ever- an empty bottle of liquor? It was from Knob Creek in a press release called "Thanks for Nothing" about the shortage of Knob Creek. They'd run out of barrels of the stuff to bottle.

Word on the street is that there were plenty of supplies of it already in bottles so I don't think any stores actually ran out of it, at least not in California, so it was more of a potential shortage than a real one. 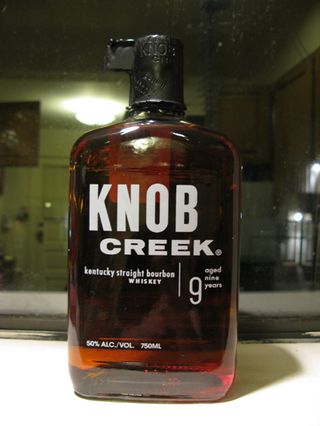 Anyway, last week I got another package from Knob Creek, this one announcing that we'd made it through the drought and the aging barrels reached nine years;  old enough to bottle again. And luckily this package contained a bottle that was full. Whether there was actually a shelf shortage or not, that was reason enough to celebrate.

I like the new packaging too- but I am not sure if it's permanent. The press release said it was a "limited edition bottle."

How do you go about starting a blog so that companies will start sending you free bottles of stuff?

I think I'm going to apply for a job writing for Drinks Mag to kickstart the idea....

There were definitely a few places here in Massachusetts that had nothing but the empty bottles where the regular full ones once were. I felt no hardship in buying other bourbon brands during that time.

They put empty bottles on the shelves?? That's awesome. I like this ad campaign even more now.

Like you, I got the empty box a few months ago. I hope I get a full one now, too!