Here is my latest story in the San Francisco Chronicle, December 27th 2009 edition.

Bartenders shift from lecture to nurture

Camper English, Special to The Chronicle

A common sight in the nation's speakeasy-themed bars is a list of rules about what one can and cannot do - and can and cannot order. But among a newer batch of bars, the trendiest design feature is dialogue.

"Three years ago it was OK to be rude. It used to be 'I'm not making a cosmo and you're a horrible person.' Now we say, 'I'm not making a cosmo, but I'm making you something better than a cosmo.' And if they like (the drink) they trust you for the whole night," says Erick Castro, general manager at Rickhouse in San Francisco's Financial District.

Bartenders at top cocktail spots have shifted from a lecturing mode into more of a nurturing one, and Castro says the strategy has paid off.

"The same people who used to complain that we didn't have Bud Light and Grey Goose are now our biggest customers, coming in three times a week and ordering rye Manhattans," he says. 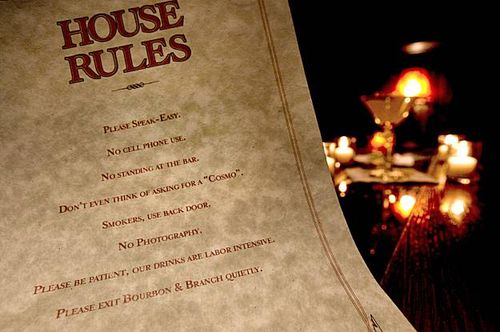 Read the rest of the story here. The story centers on how bartenders are trusting consumers to trust them more, instead of focusing on lists of rules of behavior. The story namechecks Heaven's Dog, Bourbon & Branch, Rickhouse, The Alembic in San Francisco, Copa d'Oro in Santa Monica, Drink in Boston, Klee in Singapore, and door74 in Amsterdam.

Yeah, I get around.

Your article is well timed. When customers ask for a "top shelf tequila- you know: Hornitos" in their margarita, I often reply with an offer for a better drink than what they think they want, but charge them the price for what they are asking for. I've converted many people to smaller batch artisinal tequila that way and get return customers as the reward.

Maybe I've just had some bad experiences, but many bartenders I've known were snobby and elitist about drinks, even borderline insulting. For example, I almost always used to order a Jager and coke. I know I know, this is a very odd combination! Coincidentally, I used to dip licorice into soda and eat it as a kid. So, not only does the drink kinda induce happy memories, but I thoroughly enjoy it, even if it is a little weird.

So anyway, most bartenders would give me funny looks and make it anyway. A few bartenders would use rum instead disregarding my request, presuming I didn't know better. One bartender even flat out refused. I've also seen bartenders refuse to make so-called "girly" drinks (I hate that term, by the way) to other people, even when I knew they had the ingredients (this was back when I used to peek behind the bar every chance I got to study the liquor, garnishes, tools, etc) because they thought "girly" drinks were a disgrace to the cocktail genre.

I personally don't get this "my tastes are clearly superior so I should dictate what you drink" attitude. Sure, some people like some weird stuff but hey, they like what they like. As long as they're a paying, right? I also don't mind suggestions at all, just as long as they're not just a guise for forcing their taste on me.