I stumbled across two cocktails made with sweet potatoes in one week. 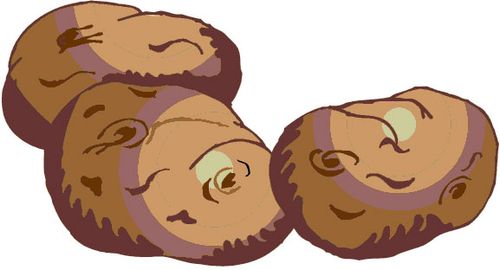 The first one I actually tried. It was served at Beso, Eva Longoria-Parker's restaurant that recently opened in Las Vegas. It was surprisingly drinkable.

The second was a contest winner for Benedictine, created by Daniel Victory of New Orleans. If you know how to make sweet potato au jus and have unflavored pop rocks sitting around, the rest is a cinch.

In a mixing glass, stir above ingredients with ice.  Next, pour into a pony glass with a “Rim of Magie”*.  Finally garnish with a sweet potato chip.

But it turns out these aren't the only sweet potato cocktails ever invented. I found two others from 2008.

The second was printed in the Washington Post, and was created by Tiffany Short at PS 7's in Washington DC. The recipe is here. It involves a sweet potato reduction, rum, and cream.

So when you have leftover sweet potatoes during the harvest this year, you'll know what to do with them.

The Beso sounds like pie in a glass — and that's not necessarily a bad thing. Thanks for sharing.

By no means are we shocked these cocktails are trending (what isn't these days?). It's quite interesting and unique. Looking forward to trying, as well as seeing what other recipes surface. The Jimador Spice is first on our list.