Last week I visited the St. George Spirits distillery to sample their new rum, Agua Libre, and watch them distill more of it.

The new release was distilled from fresh California-grown sugar cane juice (not molasses) and aged for two and a half years in French oak barrels.

After pressing 25 tons of sugar cane from Kalin Farms of Southern California's Imperial Valley, with a press imported from India, they distilled 750 individually numbered bottles. We still need to slap some labels on the bottles and will probably start selling them late May/early June for $60 a bottle at the store in distillery tasting room.  Bar Agricole will be the first account to carry the rum when they open in May. 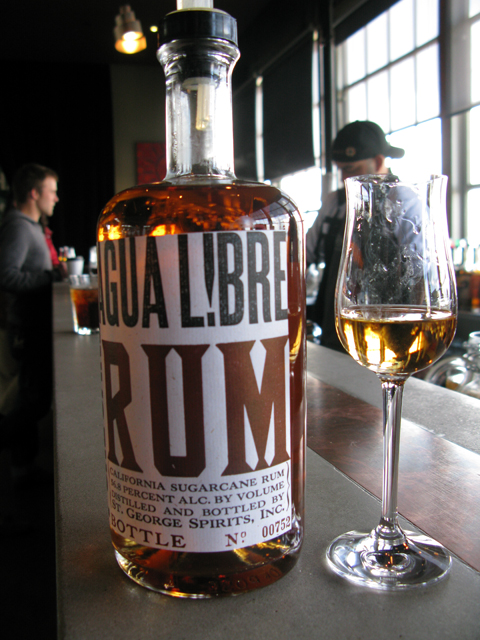 This isn't the first rum released from St. George Spirits though. They also made Eurydice, a rum exclusive to Smuggler's Cove in San Francisco. Distiller Lance Winters said that one was made from different varieties of sugar cane, and if I remember correctly it was aged in an ex-bourbon barrel as well as French oak. I've just had each of the rums once but if I remember correctly both are grassy and vegetal, but Eurydice is a lot more funky/gamey than Agua Libre.

I really like the Agua Libre and I think fans of agricole rums and Smith & Cross will really like this one as it's sort of a combo of the two styles.

As for the new rum being distilled on the day of my visit, it is made from sugar cane grown in Brawley, California. The grower, Carson T. Kalin, was at the distillery to speak to us and I sort of nerded out on sugar cane. The farm is apparently located at California's last sugar beet processing facility, (I didn't know sugar beets even grew in CA) and so far the sugar cane is purely experimental. Kalin said he is trying to find varieties suited to the hot and dry weather that would be watered by irrigation as there isn't the rainfall of the tropics there. And as sugar can has the opposite growing season of sugar beets, they could always be harvesting.

In the short term, the only thing the cane is being used for is making rum. They harvest the sugar cane by hand rather than by machine, because the sugar cane crushing machine in the distillery needs to use tall stalks of cane rather than the small segments the machine produces. After crushing the cane in the distillery, they ferment the cane juice for 15 days before distilling. I tried the fermented sugar can juice and it was crazy sour and I am glad nobody took a picture of the face I made. Luckily, once through the still and a couple years in the barrel and it fixes it right up.

Odd that there are only 750 bottles produced yet the bottle photographed carries number 000752.

Good eye! Maybe it's because they just grabbed this label and stuck it on this bottle for our photo- as you can see the label is even a bit crooked.

After crushing 25 tons of cane to yield 750 bottles or just over 60 cases I'm surprised it is only going to be $60 a bottle.

it's getting some good publicity and I'm sure collectors will jump at the chance, but the market for $60 a bottle California agricole rum may be quite limited. And the name is puzzling. I'm interested to hear an explanation.

tasted it @ a Winebow spirits portfolio tasting in NYC a few weeks back; i must admit i was very impressed. now it will indeed be tough to compete on the market between the cheap but very good $35 Matusalem 15 GR and things like $80 JM Rum Agricole 97 or 99. that's what the absinthe and Hangar One vodka are for anyway: moving lots of the clear stuff with some of the brown one along...

that said, i ll probably buy a bottle for myself as soon as it hits the east coast...

where does Matusalem come from?