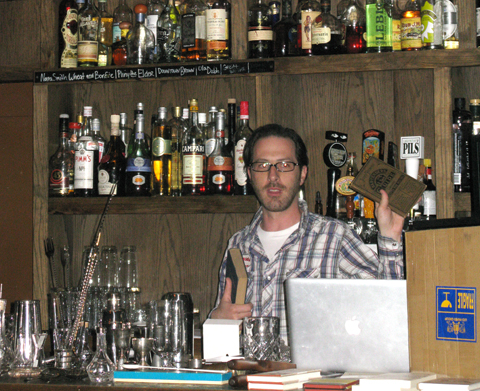 Boehm's plane was delayed so Lee gave an impromptu talk on one of his bar science projects. (When I last spoke with him, he was measuring the BRIX count of sugar syrup in all the bars in New York.) Recently he's been trying to determine how much is a "dash" of bitters in a drink.

Lee noted that different bottles of bitters release different amounts of liquid in a dash; not only just between brands but also between different-sized bottles of the same brand, and within one bottle when it is very full or very empty. (I currently have a jumbo sized Angostura bottle and the darn thing spits out a dash before I can tip it over far enough to get it in the glass.)

As a starting point of his experiment, he measured the average size dash (in weight) from the middle 80% of a ten-ounce Angostura bottle, a Regan's Orange Bitters bottle, and Angostura in a Japanese dasher bottle. He found that Angostura released a smaller amount on average than Regan's. He also found that the 90 ml Japanese bitters dasher bottle delivered extremely consistent results (but only 1/4 of the size of a Regan's dash), probably because the long neck allowed for a consistent launching distance for the liquid.

Future experiments might include testing how sensitive the palate is to these minute differences in dash size, so that we'll know how much difference a dash makes.

When Greg Boehm arrived he was mostly playing show-and-tell with his vintage barware. Boehm collects functional barware, imports barware from Japan and other countries to sell, and is now beginning to make recreations of vintage barware when nothing as good is being made today. I learned a few things:

I, too, cherish my jumbo bottle of Angostura aromatic bitters. Mine tends to spit wildly too... and it sucks, because bitters can stain ANYTHING.

I've noticed this same quandry with bitters dispensation. The current Angostura bottle I have literally puts at least a whole dash in the bottle when i merely tilt it into the glass. I end up eyeballing the amount that goes into, say a Manhattan. With Regan's and Fee's bitters it seems more balanced in terms of amount that comes out per shake. What has surprised me is that The Bitter Truth products actually do take quite a bit of shaking to get the proper amount into a drink.

Re: tasting off the back of the hand. I've seen this in certain bars in Germany, and some on the West Coast of the U.S. I'd say that it looks somewhat unusual, and may cause sticky-back-of-the-hand syndrome. Personally, I'd go with the dip of a straw and see what comes out. But, honestly, with the high quality of bartenders crafting cocktails, I'm sure that very few will go back and try to "fix" their drinks before they are served.