Scheduled to open on May 27th in the Crescent Hotel in San Francisco is the new bar Burritt Room. I had a peek at the very-much-still-under-construction space. 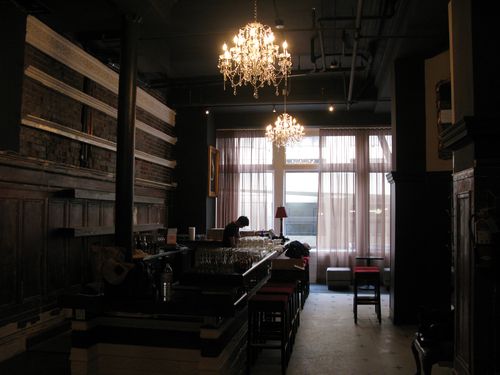 The hotel is located a couple doors down from the Stockton Tunnel, but was built before the tunnel in 1910. It was recently renovated into a boutique hotel with rooms going for as little as $89/night- quite a bargain for something so close to Union Square.

The bar is on the second floor but was originally the hotel lobby. In the process of preparing the room they had to pull off four layers of linoleum (each requiring a different method of removing the glue, depending on the era in which it was installed) to reveal the original small tile floor. They left (or added, not sure) distressed wood framing on some of the brick walls. It has a very unfinished and roughly-used look about the construction that I quite like. 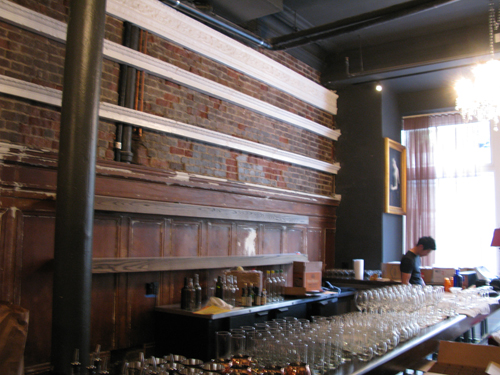 The space is one room in the shape of an "L" with the bar in the corner. On the short end of the L is a small parlour-like area with modern but vintage-inspired couches for seating. There's another alcove with similar seating along the long part of the room. 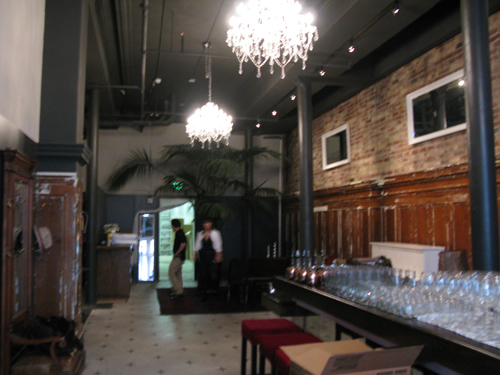 At the far end, through a door, is the space that will become the hotel's restaurant. It is months away from opening and in the meantime is being used to host bands and special events. 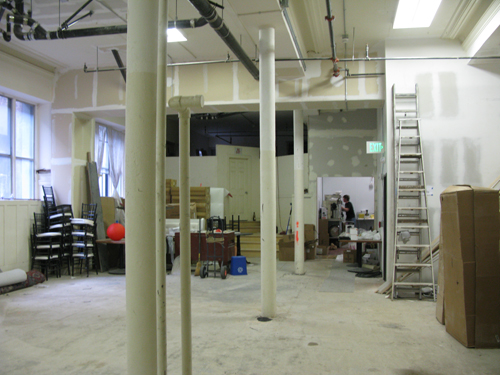 The cocktail program is in the care of beverage director (and bartender) Kevin Diedrich who worked at Bourbon & Branch and Clock Bar but in the last 16 months has been working in bars in DC and New York including PDT and the Clover Club.

Diedrich says his goal is to keep the bar program in line with the hotel's pricing and clientele; an accessible program at reasonable prices and with cocktails between $8 - $10.

The menu will have 18 cocktails that will be a combination of classic, contemporary, and seasonal drinks. He'll try to hit at least one with each base spirit- pisco, rum, gin, etc.- plus one made with each of beer, wine, and champagne.

Speaking of beer, just three will be on tap, probably all local, and one seasonal. The Burritt Room will also have a canned beer program.

In the same spirit of cost-effectiveness, even most of the top-shelf spirits on the back bar will be capped at a reasonable price. Diedrich says you won't find 30 types of scotch at the Burritt Room- maybe ten, and easy-to-navigate. The goal is not to overwhelm people with 100 cocktails and 200 whiskies.

There will be a few soft-opening parties before opening date, so there may be more reports on the progress of the build-out to come.