A Book Review and Excerpt: How To Booze- Exquisite Cocktails and Unsound Advice

How to Booze: Exquisite Cocktails and Unsound Advice

by Jordan Kaye and Marshall Altier was released a couple of weeks ago. The book purports to be a pairing of cocktails with the appropriate life situations, but after reading it I think of it as often hilarious, well-written text and very good recipes; many of them new to me. 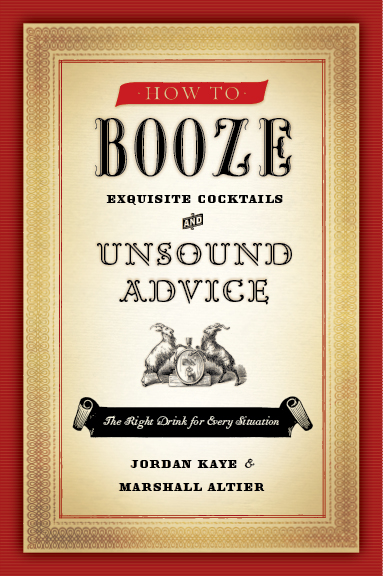 The pairings are fun and include the appropriate drinks for self-pleasure (Adonis), playing Dungeons & Dragons (Bobby Burns), experimenting with your sexuality  (Fancy Free), reading the bible (Angel Face), Surviving (your kids') Sleepovers (Old McIntyre), and the apocalypse (Spiced Colada).

I find the text charming even when the theme is "Sexual encounters in generic bars and hotels across the land" as it is for one chapter. The tone is almost that of an older man reflecting back on life, like you'd get in a movie voiceover: "Sometimes this stuff happens, and you may as well have a drink." After reading a bunch of the book I began wishing the voice was a character in a novel who could go on these drinking asides in the midst of a plot about something else. Which I guess is saying I really liked it.

But anyway, the best way to learn about the book is to read a chapter, so they've allowed me to publish an excerpt, which you'll find below the jump.

The Proposal: “I Do Not Want to Be Doing This”

Well, then, toughen up and just don’t. Marriage can be great for the right people in the right circumstances, but if you’re disposed to view marriage with fear, we can assure you that it’s everything you’re afraid of and more. Marriage is not for a lot of people, many of whom are already married. Your distinct advantage is that you can be unmarried—and you don’t even need to hire a divorce lawyer to get there. Don’t even think of trying to extend the relationship past tonight, though; it will just go from bad to worse.

It is true that the expectation to propose/accept a proposal is an acute problem in your life. But if you think that getting engaged is a viable solution then you are suffering from an even more acute failure of the imagination. So we will spell it out for you: the next six to nine months of wedding planning will be more psychically excruciating than anything you have ever experienced. And only then, once that’s over and you’ve settled into a reluctant marriage, will you first learn what “psychic pain” even means.

Stir and strain into a cocktail glass.
Garnish with lemon peel.

If a Manhattan and a Negroni shagged up, this would be the spawn. Not quite like either of its parents, though, is it? Like a Manhattan, the Boulevardier takes its sweetness from Italian vermouth and its spicy depth of flavor from rye. But the Boulevardier’s Campari bitterness is much crisper and more pronounced than what you will get from the rich, almost musty Angostura found in a Manhattan. Meanwhile, the Boulevardier differs from the Negroni in two ways: first, most obviously, it uses rye rather than gin. But equally important, the Negroni is equal parts each gin, vermouth, and Campari, whereas the Boulevardier is heavier on the spirit. This makes the Boulevardier less bitter and also a bit heavier and boozier.

I actually made this last night for myself. I like it much better than a Negroni, where the Campari overwhelms the gin, whereas the rye (Rittenhouse 100) stood up to it. The description above, with the comparison to a Manhattan and Negroni, is on the mark, but the book in general doesn't sound up my alley.