I had an advance look at the cocktail menu for Prospect, the new San Francisco restaurant from Boulevard folks that opens on June 29. The beverage program was designed by Brooke Arthur, the long time bar manager of Range in the Mission. 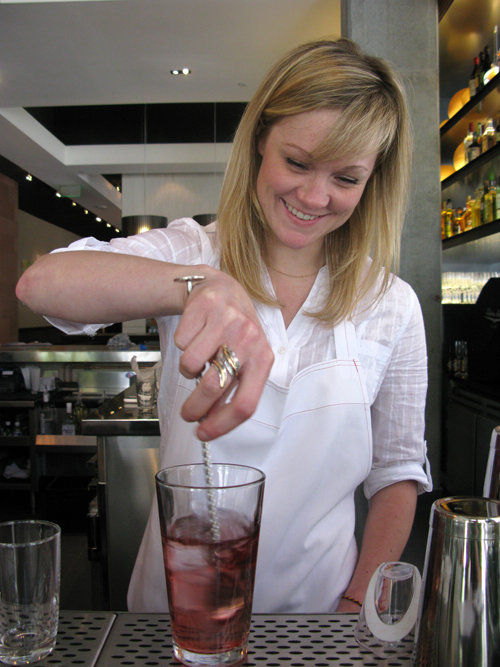 The menu is below, but keep scrolling for my taste-through of the drinks.

And Now for a Tasting

I like this menu a lot- there's a nice balance between lower-alcohol drinks (Central City, Bitter Guiseppe), girlie drinks (Candace, The Whaler, Classy Lassy), and macho drinks (Catcher in the Rye, Stallion, Prospector). It also reads well- there are a lot of friendly fruit flavors like strawberry and cherry juice balanced with challenging spirits like Zirbenz and Amer.

But how do they taste? Luckily I can answer that. I had a mini drink-through of the menu. 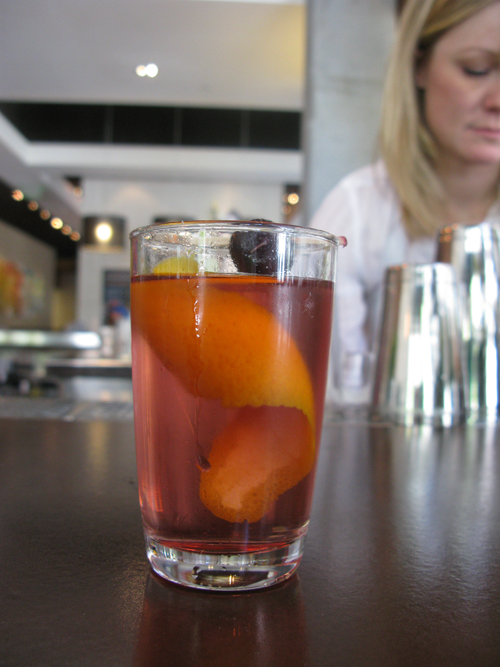 book. It contains vinegar, sugar, cloves, and cherries. (The cherry garnish in the drink is from the same batch- make sure to try it.) This drink should be served by the vat at outdoor cafes and summer barbecues- it's a classy outdoor drink. 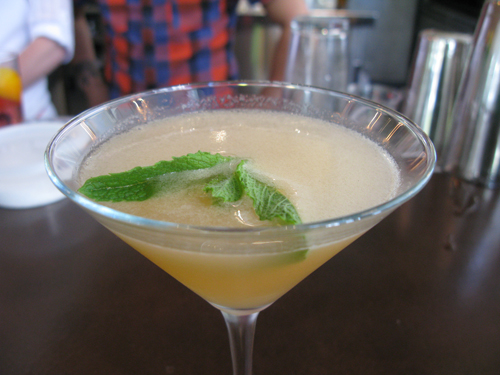 The Mr. White (pueblo viejo blanco, st. germain, strawberry-mint shrub, lime) is named for bartender Neyah White of NOPA (who will be leaving the post at the end of June), as the strawberry-mint shrub is apparently his grandmother's recipe. The strawberry and tequila combination nearly always works well, and in shrub form (yes folks, that's two vinegar drinks on a menu!) it's even better than usual. 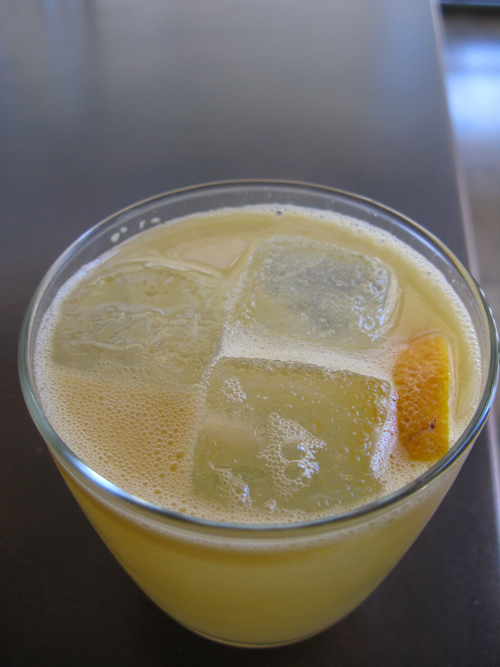 The Candace is one for the ladies- vodka, white wine, cantaloupe, vanilla syrup, and lime juice. It's not overly sweet, but the vanilla gives it a false sweetness that might make you think so. It also has a bit of Orange Julius flavor to it that I always like despite myself.

The drink is named for the whaling ship Candace found buried for 150 years at the site of the restaurant when it was being built in 2006. Read the story of the ship's discovery here.

The Vicious Circle (wild turkey rye, zirbenz, drambuie, pineapple gum, lemon) is a riff on the Algonquin Cocktail. My mouth is always a little confused by drinks that combine lemon or pineapple juice and dark spirits (I expect gin but get rye) but I like the results. Many of the drinks on this menu are food-friendly, and this one is in that camp- it's interesting but not so strongly flavored that it's trying to compete with dinner. 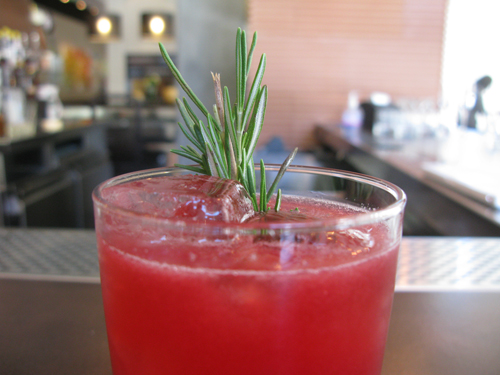 The Roxanna (siete leguas blanco, aperol, cassis, blackberry, lime) will probably be the star drink of this menu. Arthur smartly chose a dry, spicy blanco tequila that brings out the wonderful fruit-pepper flavor combination that works so well in cocktails (anyone remember the Rouge No. 10?), with Aperol acting as a bridge between them. Arthur chose to serve this drink on the rocks, but it is dense enough in flavor to be served up and juicy/strong enough that it would make a hell of a shot.

(Catcher in the Rye.)

I've consumed a million Manhattan spin-off drinks made with port, amaros, and other vermouth substitutes, and I'm glad to report that the Catcher in the Rye (wild turkey rye, amontillado sherry, amer, grand marnier, abbots bitters) isn't one of them. Instead it's another drink that would be great with a meal- the nuttiness of the sherry comes through and the Torani Amer and Abbot's bitters (made by John Deragon) combination dries out the finish in a lovely way. Another food-friendly drink here. 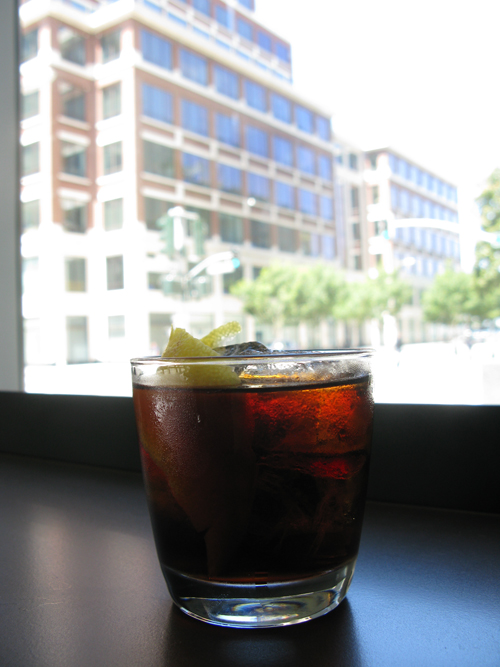 At first sip the Bitter Guiseppe (cynar, punt e mes, orange bitters, lemon, created by Stephen Cole of Chicago) comes off a bit syrupy, but then the delightfully dry and bitter finish- that's six dashes of Regan's Orange Bitters in there- lets you know that this is a digestif drink after all. 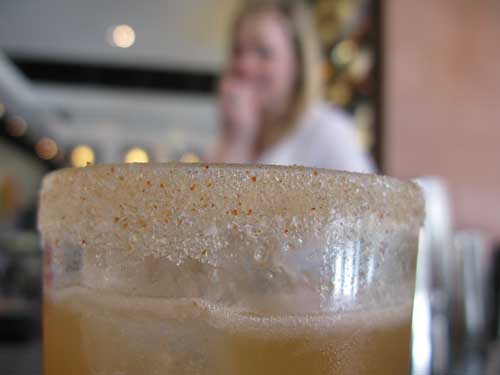 Arthur said the Kingston Crusta (smith and cross, maraschino, ginger beer, lime, angostura bitters) was the drink she was most worried about. (You can see her biting her nails after serving it to me in the picture above.) It's a really unique combination of bold flavors- an ultra-funky rum, maraschino liqueur, and though it doesn't say it on the menu, it comes with a chili salt-sugar rim.  It is a little crazy, and I like it.

So that's what I did on Monday afternoon. Mmmm, Mondays.

Overall, the menu is solid so I'm just going to suggest that you try every drink on it: There are only twelve so you should be able to get through the menu in three or four visits. They all read well but I was surprised at which drinks I ended up liking the most. (Roxanna, Central City, Catcher in the Rye, Mr. White for me.)

Then again, I only had eight of the twelve drinks so far. I could find new favorites still.

i need to try the central city soon. also the roxanna. when are we going there, camper?!

I have a feeling I'll be there quite a bit in upcoming weeks.

Terrific job as per usual, Camper. And don't fight the love of the Orange Julius...

Not one pisco cocktail on this menu? We must not be in San Francisco anymore :/

Miguel- that occurred to me too. But two tequila cocktails helps make up for it :)